I wrote to Prince Andrew for his birthday and I got this as a reply. It's pretty generic, but similar to my other letter from him. This letter was written on a half sheet, by his Private Secretary Amanda Thirsk, who has written all the letter I've received so far from the Duke of York.

I sent my letter to the Duke on the 4th of February. The reply is dated Feb 18th, the day before Prince Andrew's birthday, but was mailed on the 23rd, 5 days later. It arrived on the 28th. (24 days is a pretty great response time for the royals.) 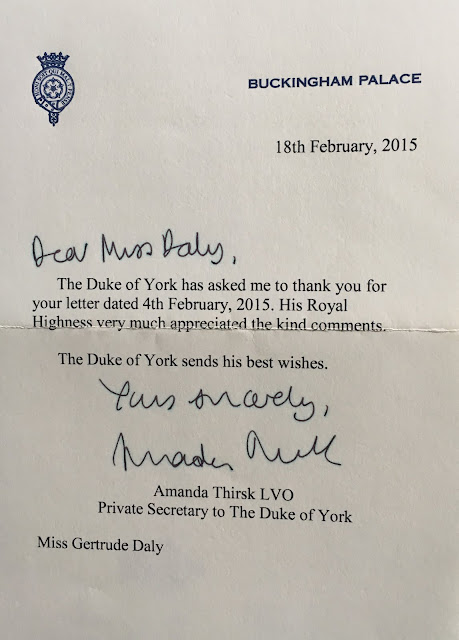 What is surprising about this letter is that it doesn't mentions why I wrote. It is obviously NOT a form letter in that my name is printed at the bottom and it mentions of the date of my letter.

The reply I got for my Christmas letter to the Yorks, also didn't mention that I had written for Christmas or that I had addressed the letter to both Princess Beatrice and Princess Eugenie as well, not just Prince Andrew.