Today, I received a letter in the mail from Buckingham Palace. The letter was sent by Prince Andrew, Duke of York's office thanking me for writing to wish Princess Eugenie a wonderful 25th Birthday.

This letter is quite similar to what one should expect when writing to the Yorks. It is incredibly brief only two sentences long and written on an A5/ Half sheet of paper (Responses from the Yorks vary between half and full sheets). All of my responses I've received so far, from the Yorks, have been written by Amanda Thirsk, Prince Andrew's private secretary. The letter is hand-signed. 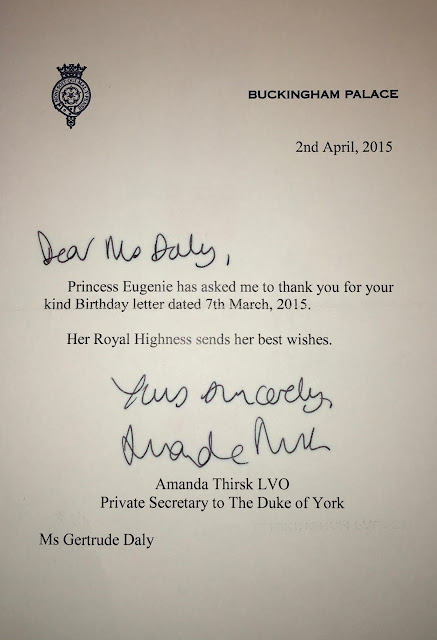 This reply came 46 days after sending my letter, which is on the longer side, but still quite normal, for replies from British Royals. The letter is dated the 2nd, but is postmarked a week later on the 10th.
The letter took 6 days in the post to arrive, which is usual for the BRF. You will also note that I'm referred to as Ms. Daly, instead of Miss Daly which I write on all my letters. The more personal a letter is the greater attention to using the correct title.

Princess Beatrice and Princess Eugenie don't have their own Office/Household and are supported by Prince Andrew's office.