Thank You Letter from the King and Queen of Netherlands (2015)

I almost over looked this piece of Royal Mail when it arrived today.


I had written to the King Willem-Alexander & Queen Máxima after they had visited the USA on a Official Royal Visit in early June. They were going to be visiting really close to me, so I had planned on go to see them. I ended up not being able to, but decided to write to them about their successful tour and some local media coverage. 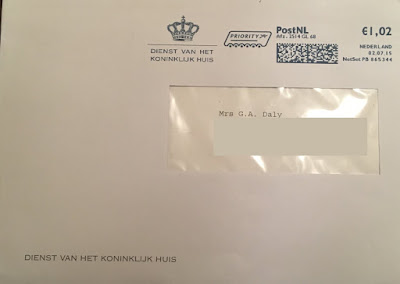 This is the 1st time I had written to the Dutch Royals. I really like this reply. It looks different than other Royal letters.

The Envelope is one of those large, half sheet of paper sized envelopes with a window for the address (1st piece of Royal Mail I've gotten to have such). The envelope is your normal business mail thickness and quality, which is why I almost thought was a bill at first and set it aside.

Like with other Foreign Mail, the envelope is written in the country's native language, Dutch. It features the Royal Monogram on the front of the Envelope. The message under the Blue Crown reads Dienst Van Het Koninklijk Huis (Bureau of the Royal Household).

The reply was sent by Priority Mail on July 2nd and arrived 5 days latter, about a month after I sent my letter.

The Letter is on a full sheet of printed stationary. It has a embossed coat of arms on the upper right hand corner (You can't really tell in this picture). The letter was written by the Deputy Principal Secretary to the King and Queen, F. L. Manche, who hand-signed the Letter. 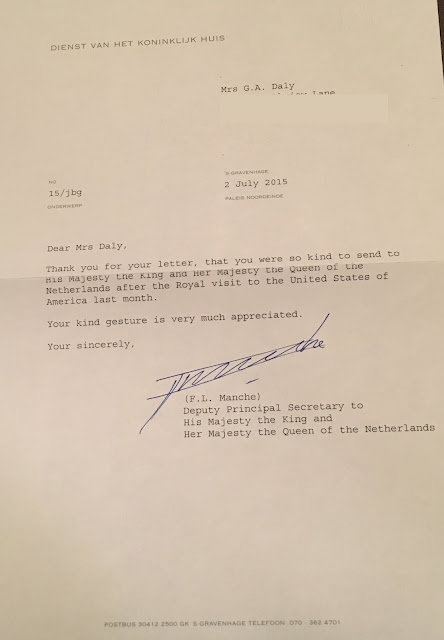 The note is very brief, but mentions specifically why I had written. The Dutch by the date denotes that this was written at Noordeinde Palace in the city Hague. I'm not entirely sure what the Dutch on the left hand side means. Onderwerp translates to Subject or Topic.  So I assume 15/jbg denotes the topic and number, but I really have no idea what this references.

Also Check Out:
Other Replies
Replies from the Netherlands
at Tuesday, July 07, 2015