A reply from the UK came today! I had written to Sarah, Duchess of York last month for her 58th Birthday.

The reply is the usual you see from her. The back of the envelope features Sarah's green Monogram.

Inside is a simple letter, thanking me for remembering the Duchess's Birthday.

The letter is signed by someone. Like usual no printed name or position. But the signature does look similar to the letters I've received from Sarah's office in the past, so likely the same person.

This reply had about the same response time as other years for Sarah's birthday. 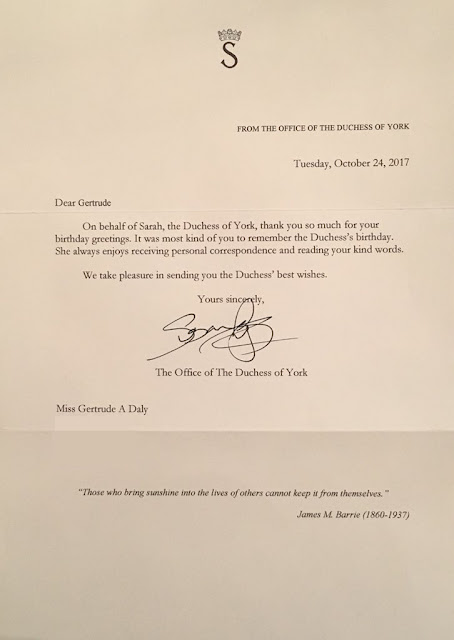 Sarah has changed up the quote at the bottom of her letter. This year, she features J. M. Barrie, a Scottish Author, best known for his Peter Pan novels.

The quote reads: "Those who bring sunshine to the lives of others cannot keep it from themselves." - James M. Barrie (1860-1937)

There is quite a bit of Royal - Peter Pan connections:


Also Check Out:
Other Replies
Writing to the Royals
at Thursday, November 02, 2017