My first Christmas reply of the season arrived today! It is from the UK.

I had written to Prince Andrew, Duke of York earlier this month to wish him and his family a very merry Christmas. Like usual, Prince Andrew's office replied with a letter, written by Andrew's Private Secretary, Amanda Thirsk. 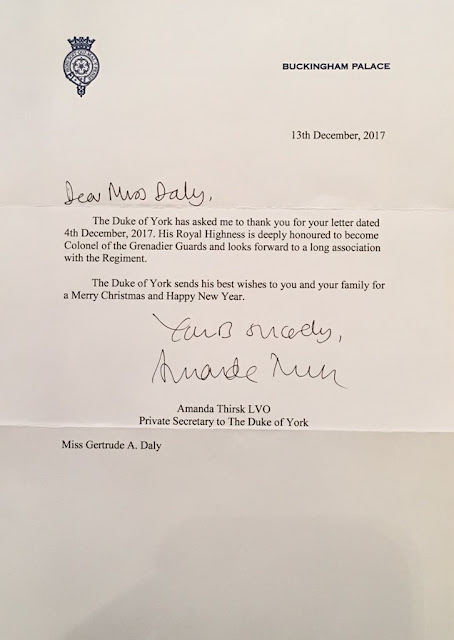 In my Christmas letter, I had mentioned Prince Andrew taking over the position of Colonel of the Grenadier Guards from his father, Prince Philip. It is always very heartwarming to get a reply that references what I wrote about. It makes it very personal and you know someone took the time to read your letter. Of the 4 Christmases I've written to Prince Andrew, this reply is definitely the most personal of the 3 replies, given the little reference to something specific from my letter. (Sadly no reply to my 2015 Christmas letter to Prince Andrew.)

My letter this year to Prince Andrew was one of the last Christmas letters I sent, and as I said the 1st reply. It came about 2.5 weeks after I wrote, which is a great response time for the British Royals.

Also Check Out:
Other Replies
Christmas 2017 Replies
Writing to the Royals
at Thursday, December 21, 2017