The 2nd reply is from the UK. I had written in January for Duchess Kate's Birthday. This is the 2nd time I've received my reply for Kate's Birthday before the Cambridge Christmas reply. The correspondence section at Clarence House is always very busy over the holidays, and especially this year with Prince Harry & Meghan Markle's engagement.

The reply is the usual photo card. On the front is a photo of Duchess Kate taken during the Cambridge's 2016 Tour of Canada. It is the same photo used for last year's reply. It is very common for them to reuse a photo for a number of years or events.

This year's photo is a little different as they have added a white border. Below, you can see the 2017 & 2018 replies side by side. They used to not do a white border on these photo cards, just Camilla's larger ones. But in the last year or so, I've seen it on almost all the replies from Clarence House. Personally, I'm not a fan of the white border, it makes the photo so much smaller and doesn't seem as elegant. But it seems like they have made the decision to switch.


The back of the card features a new thank you message. All the past birthday replies from Kate, I've gotten, had the same message on the back. It is nice to see them change it up this year. I especially like that they've added her age. It is nice to have something that dates the card, given that they don't have a date on it. 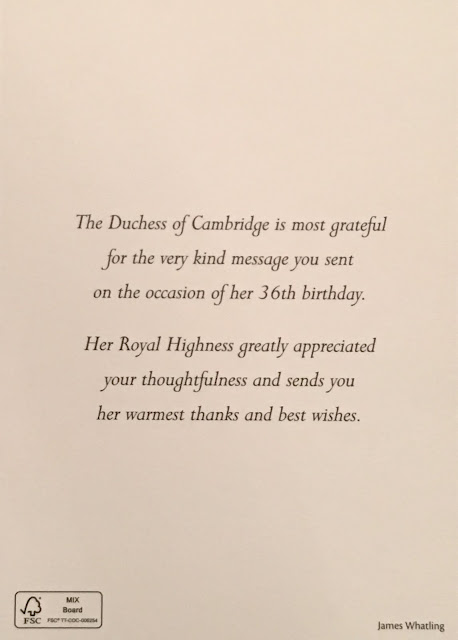 Also Check Out:
Other Replies
Christmas 2017 Replies
Writing to the Royals
at Tuesday, February 20, 2018