Be sure to check out our new "Questions" tab!

Question 1: I've been waiting for a Letter from Belgium for 4 months and it hasn't come :( Do you think I will receive a reply? I think it's been too long.

Answer: I have always received a reply from the Belgium Royals. I've written to them for deaths, birthdays, christmas, illness.  The longest I've had to wait is 3.5 months, so a 4 month wait time isn't that far off. It can take a while for replies in the summer because staff is often on holiday.

Question 2: Who are your favorite Royals?


Question 3a: I liked Princess Mary, but she seems really cold and distant compared to Maxima, Harry, even Charles. What do you think?
Ps. I do admire Princess Mary's work, especially on gender equality.

Answer: I think every royal gets called cold and distant. There are always people who say things, just because they don't really care for that royal.

Crown Princess Mary of Denmark has always seemed very warm and welcoming to me. She is very dedicated to her causes, and is always well informed and interested. I also really admire her work on gender equality.


Question 3b: I heard Princess Mary is lofty and spends much more money on clothes than even Maxima or Kate. What do you think?

Answer: Crown Princess Mary certainly like designer clothes, but we also see her in regular everyday $50 dresses.  I don't think she spends more than any other royal lady, and I think she recycles clothing just as often.

You also have to remember that a lot of royals get designer clothes, or bespoke items, at a discount. So they are only paying a fraction on the sales price. Other times they maybe given something as a gift.

Question 4: I have been waiting for a reply from Queen Elizabeth for her Birthday for 2 months. How long will I have to wait?

Answer: I've been waiting almost 4 months, so a bit longer than me. I still haven't gotten my reply yet, and I wrote in April. But I know Buckingham Palace has been working hard to get them all sent out.

Big events always take a long time to reply to everyone. We saw the same thing with Princess Charlotte's birth last year.

Question 5: What is your favorite Royal Wedding dress?

Answer: That's a hard question to answer, there have been so many beautiful wedding dressed over the years.

I am a fan of laces dresses, so Duchess Catherine's, Princess Grace of Monaco, Countess Stephanie of Luxembourg, & Princess Madeline of Sweden's are among some of my favorites.


But I also like how some royals went a bit untraditional with their dresses.


Question 6: Are there any other good blogs like yours that are dedicated to royal letter responses?

Answer: I can't really think of any who go what I do. I know a lot of people who write, but they don't exactly blog about them or only write a few times a year.

If you go on Twitter and search a royal's name and the word "Letter" or "Mail" you can often find some stuff. Or if you search #RoyalMail on Instagram.


Question 7: How long are your letters to the royals? Are they handwritten or typed?

Question 8: Do you know when the Queen travels to Windsor Castle?

Question 9: On your replies page for the British royals, you say that you have many other responses, but they were before your started blogging. Will you ever put them on the blog?


Answer: I started Blogging in January 2015. I had only been writing for a few month in 2014, so I don't have too many letters from back then (Most of them were for Birthdays). What I have tried to do is when I did a post for the Royal's birthday reply in 2015, I included 2014's reply that never got posted.

So most of the replies are on the blog. They just don't have their own blog post.

I have a few still that never got posted (From both 2014 & 2015), but they aren't that important, and they look just like all the other replies from that person.

Question 10:  Hi. I have few questions about writing a letter for Prince Harry's birthday:

a. If I send a birthday Card to him on 15 August would it be werid?;) If I send my letter 1 month before his actual birthday, will I receive a birthday photo reply?

Answer: It wouldn't be weird to write a month early. It does take time for the letter to get there and for them to get to it. I think the perfect time is about 2 weeks ahead. But in reality you get to it, when you have times. Some times that means 30 days ahead of time, other times that means sending out your card on his birthday.

When you write too early, sometimes the staff gets to your letter before they have made and printed the card for that event. So instead of the photo card, they reply with a letter. Or they don't have the card printed so it just sits in their office for 2 weeks till they do.

We talk a bit about when you should write on our FAQ: Writing to the Royals. See Question #7.

b. Does Kensington Palace always send a photo of Harry for birthday replies?

The usual Birthday reply is a photo with typed message on the back. It's a nice reply that they can send out to everyone. However when they send out a more personal replies, those are usually letters, and they often don't have a picture. But most people get the photo reply.

c. How long it takes for them to answer? Cause I usually wait 2-3 weeks for repiles form Harry?

Answer:  It just depends, on when you write, for what occasion, how busy they are, etc. It could be very quick a few weeks or it could be a few months. It varies.

Question 11a: How long do you usually wait for a response for Prince George birthday?

b. And can I send a letter even now, after his birthday?

Answer: You can always send a letter. The Royals alway appreciate people's well-wishes. I would always try to get a letter out by the person's birthday. But I think there is that window after a person's birthday where you're obviously writing late, but it's still appropriate. And I would say that window is about a month.

After that I would write a more general letter, and mention how you hoped that they had a wonderful _____.

Question 12A:  What do you think about sending a Birthday letter to Prince Nikolai of Denmark? I doubt, if I will get a response, but maybe...? How Denmark Royal Family approach to getting letters for children? What is your opinion?

Answer: I've never written to Prince Joachim and his family, so I don't know how they answer their mail.

I have written for Mary and Frederik's children, but never for their birthday. I wrote once for Princess Isabella's first official engagement with mum. 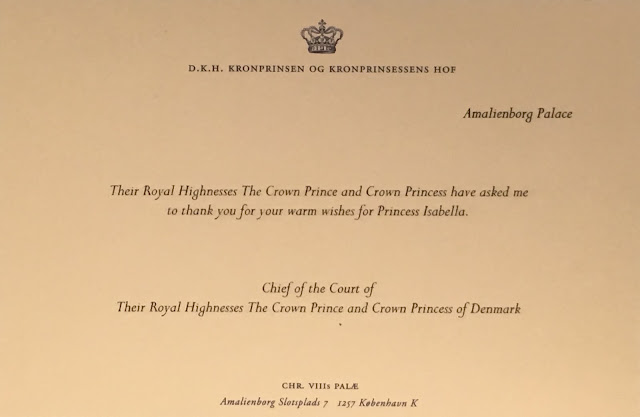 And once when Princess Josephine's broken arm. 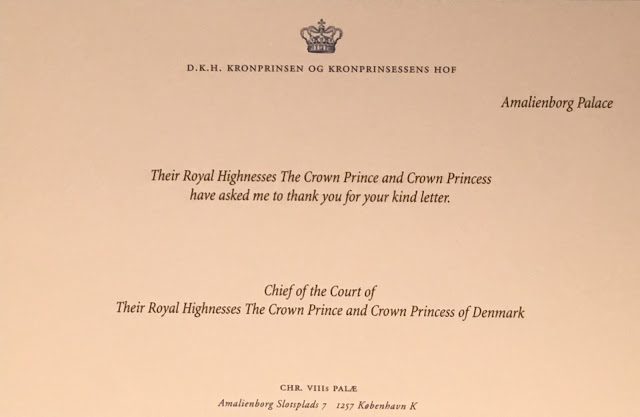 I have almost always gotten a response from the Denmark Royals. So assuming Prince Joachim office handle their mail similarly, I think you have a good chance of getting a reply. & Birthday are always a good time to write.

But even if they don't send replies, you can still write and send your well-wishes.

B. Thank you for your help. And I'm sorry that I wrote my question under the post. Sorry!


Answer: It fine that you posted the question on some random page that you were looking at. You think of questions, when you think of them. I just like when the question doesn't relate to the blog post, to answer them here on the monthly Q&A. I would have just taken your orginial question and answered it here.


And I didn't get to your original question earlier, cause I was sleeping.

C. When I write to Prince Nikolai, should I write on the envelope Prince Joachim or Prince Nikolai? Could you give me their address?

Answer: The address is the same for all the Denmark Royals:

Since Prince Nikolai is turning 17, you're likely going to be writing to him, and he going to be reading some of these letters himself. But with small children, people often write to the parents.

We talk bit about this on our writing FAQ, on Question #6.

Question 13: I'm curious how much is a stamp for a letter abroad in your town? Is it cheap or expensive?

Answer: I'm from the USA. Assuming I'm sending a standard letter with a Forever stamps or Global Forever Stamp, at the current price.

So a letter abroad costs the same as 2.4 letters to someone in my country.

But how expensive is that?

My Favorite Starbucks drink costs about $4.50ish, so I can send 4 letters abroad for the same cost of my Venti Iced Chai Latte with non-fat milk and 2 pumps of Sugar-Free Vanilla