Question 1: What do you think about Harry, Meghan and Cambridges latest appearance together?

Answer: I thought it was great. It was wonderful to see them all together and I really enjoyed learning more about the Royal Foundation and its future goals. I gained a deeper appreciation and understanding of their work.

Question 2: What name do you think Princess Madeleine will choose for her third child?

Answer: I really have no idea. I'm always really bad at guessing baby names. I think it will be a good Swedish name that also works well in English.

Question 3: What are your favourite royal replies?

Answer: This is another hard question to answer as there have been so many really great replies over the years.

There are so many reasons why a reply may be one my favourites:

Question 4: Have you ever wrote to Prince Alexander of Serbia, Prince Leka of Albanians or King Constantine of Greece? Do you have any replies or know if they reply to the letters?


Answer: Of those 3, I have only written to Prince Leka of Albania. I wrote for his wedding a few years ago. No reply and I don't think I've ever seen a reply from him. I have seen replies from the Serbian and Greek royals before, but haven't written to them.

Question 5: I just received a reply from Duchess Sarah, a photo glued on a piece of cardboard. I was wondering how do you store the ones you have received? It will not fit in my binder nor the plastic.


Answer: They fit in my binder so I store them there. Sarah's envelopes from those photos glued to cardboard are the only thing that has ever been too big to fit in my binders, and since the envelope aren't really anything special I threw them away.

Since the cardboard isn't anything special you could try to carefully trim it down. You could also just get a box where you store oversized items.

Question 6: Would you mind sharing a photo of your binder or making a post about it? I want to store my letters somewhere but I don’t know how.

Answer: I've reorganized my replies a few times over the years.

I started out storing them in a decorative box, with all the different royal replies together in the order I had received them. I kept all the replies in their envelopes and it was a little hard to flip through and look at each one.  And I had some replies from Duchess Sarah that were too big to be kept in the box, so they were stored elsewhere.

When my binders started getting too full I divided the British royals into 3 binders (William/Kate/Harry, Queen/Philip/Charles/Camilla, and other British Royals), and moved the foreign royals to a bigger binder. Over time, I switched from having a section for each individual British royal to grouping them by couple/family. This is much easier since for Christmas, anniversaries, births, etc. I often write to the couple, not one royal.

In November, I reorganized my binders again. The 4 binders were getting a little full, and I wanted to give myself room to grow over the next few years. So, I expanded the binders from 4 to 7 and there is now plenty of room for future replies. 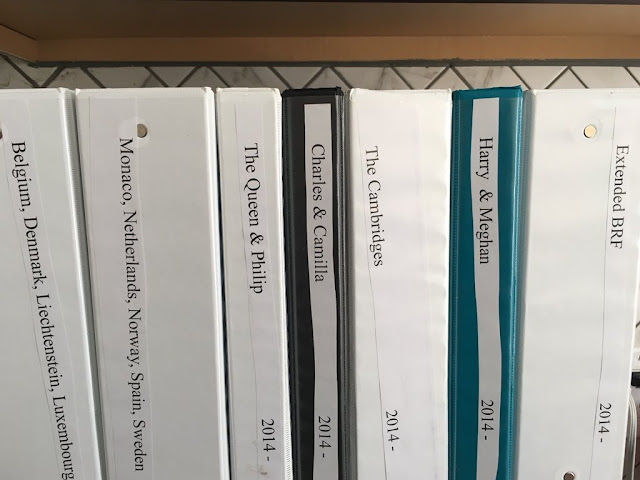 I typed up title pages for each section and labelled the binders better. At the bottom of the title pages, I have stickers to note which years, I have replies from. (For some where I have gaps in years, I have a sticker with an x through the year.) 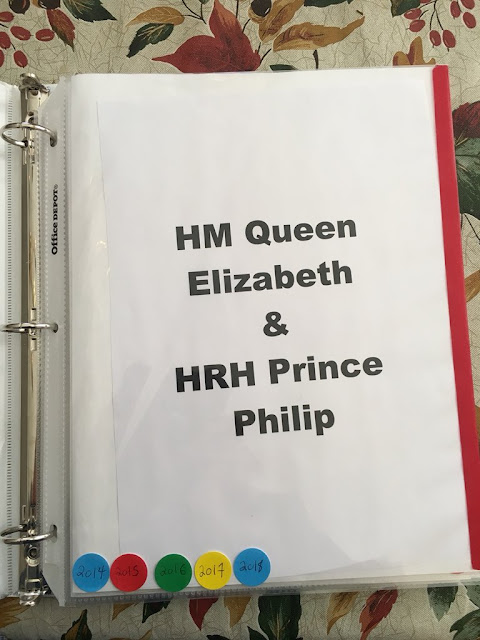 Each reply gets its own page (or two pages if needed). The replies are ordered based on when I received the reply. And I keep all the envelopes, except a few of Duchess Sarah's that were too big to fit in the binder. Each page is numbered with a sticker, and the color denotes the year I got the reply. This makes it really easy to flip through and find a certain reply from a certain year. (This is especially helpful since some royals send out almost identical replies year after year.)


To make it easy to flip through the binders different sections, I put red tape on each of the title page. 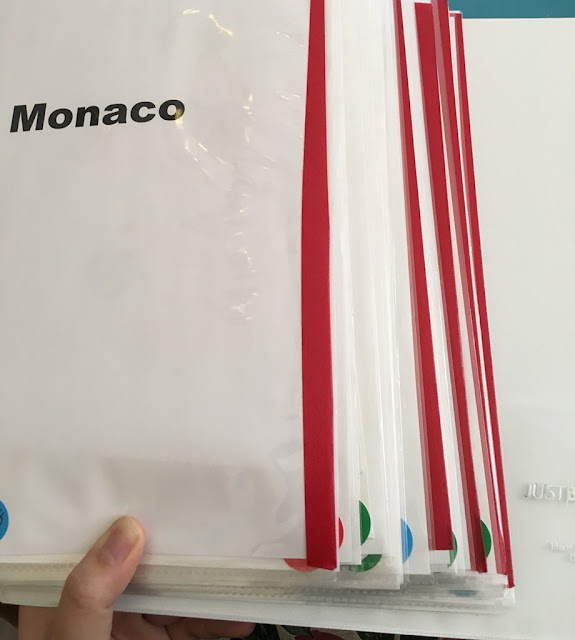