Question 1: Are we sure to get a reply for princess Charlottes birthday? I'm asking because they thanked everyone on Facebook and Instagram for their birthday wishes and I'm scared that we won't be getting a photo of her in the mail.

Answer: The Cambridges will still send out their usual photo card reply. Don't worry.
They just wanted to make sure they thanked everyone for Princess Charlotte's Birthday Wishes. Most people only wished Princess Charlotte a happy birthday on Social Media, so they have to say thank you there. They have done this in the past.

The Duke and Duchess thank everyone for all the lovely birthday messages they have received for Prince George. pic.twitter.com/DAX6RQmbg6
— Kensington Palace (@KensingtonRoyal) July 22, 2016

Question 2: Do you think Prince Harry will visit NZ after Australia for the British and Irish Lions tour

Answer: Nothing has been announced about New Zealand. There were rumors earlier this year that Harry would be joining the British and Irish Lions tour. I don't seem him being an official part of the tour. But certainly, if he's in the area, I could see him stopping over for a match. There is a June 3rd & June 7th Match which are possibilities.

Question 3: How is it decided where the Duke and Duchess of Cambridge visit on an overseas tour? How would I put in a request for them to visit an organization I work for to see if they would accept?

Answer: Overseas trips are usually coordinated by the Foreign Office. If it's a tour, often they have been invited by the country to make an official visit. What places the Royals will visit on their trip are going to be chosen by the Foreign Office, the British Embassy in the country, the country's government, the Royal's office, etc. This usually means organizations and charities that one of these groups are familiar with or has a relationship with.

I know in the UK, if you would like a Royal to visit your organization it is best if you go through the Local Lord Lieutenant. They coordinate and plan everything for that area. They know when Royals are visiting, what would make a good visit and recommend things to the Royals.

I'm not 100% sure on who to contact about the visiting an overseas organization. But you could connect the Foreign Office, the British Embassy in your country, someone in your government who would be planning such thing, etc. Or you could contact the Royal's office directly, by sending a letter to their Private Secretary.

Sometimes a royal makes a short overseas visit to some special project in another country. But this is usually with one of their patronages, and something they are very familiar with.

Question 4: I send a letter to Princess Eleonore of Belgium on the occasion of her birthday. Do you think I will get a reply? Or does Belgium only responds to letters to adults?

Answer: I haven't ever written for one of the kids, but I believe I have seen replies other people have gotten for children's birthdays. You just got to give it time. 1-2 months is normal. Eleonore's birthday was April 16th, so it hasn't even been a month yet.

Question 5: Would it be appropriate to send Prince Philip a letter because of his retirement? I would tell him how much I admired his work ethic and the way he always supported the Queen and I would also wish him a pleasant retirement.


Answer: It would be very appropriate. I think Prince Philip would really love to hear that people support him and wish him the best. His 96th Birthday is also coming up so feel free to mention that in your letter as well.

Question 6: I sent two letters to the Cambridges on the same day: one for their anniversary and one for Charlotte's birthday. I got a reply to the anniversary letter on Friday but nothing for Charlotte's yet. Should I be worried or do they send out her birthday replies later?

Answer: They get to things when they get to it. They get a lot of mail, and it takes a while to get through it all. Don't worry. It could take days, weeks, months. Just because you got one reply doesn't mean your other letter was next in the pile.

I've seen people write for the same event, at the same time, and get replies months apart. I've also written for one event, wrote again a month later for something else and got the reply for the 2nd letter before the 1st.

I think often they try to wait till after the kids birthday to start sending out replies. Especially if they are using the photo that was released for her birthday.

Question 7: When did you send your letter to the Queen this year?


Answer: Probably wrote a week before her birthday. Lately, I haven't been good about getting letters out as soon as I would like. Usually, I try to shoot for 2 weeks ahead of time.

Question 8: Did you have letters you sent to the Dutch royals that you didn't get a reply to?

Answer: Yes, I've had quite a few letters to the Netherland Royals that haven't been answered over the years. I think they mainly been when I wrote after an illness/injury/surgery. Also Princess Beatrix for Christmas.

Question 9: Do you have any information on the Spanish royals? Like do they reply, who do they reply to? Is it possible that they only reply to people sending letters from European countries?

Answer: The Spain Royals do reply occasionally. They just are unpredictable. There isn't really any logic I can point to. It's not a country specific thing. I've seen people get replies and not get replies from the same country. And I've seen plenty of replies to letters from outside Europe as well. It's not a language thing either.

After Christmas, I did a pool of GertsRoyals followers on Twitter and 50% of them got a Christmas reply, 50% didn't. So it's not that they only reply for certain events. I don't know why they don't reply to every letter. But I have seen people not get replies, and then get a reply, or vice versa. So you just have to get lucky.

Question 10: I have a reply from Camilla, handwritten on to a card with a typed anniversary thank you message. It looked like it was written in black marker. I had it on display in a frame (behind glass) in a sunny room, although the frame was not in direct sunlight. After a week or two, the colour of the ink changed drastically, to a purple colour. Then, thinking it was fading due to sunlight, I moved it to a dark room but it still continues to fade, now it is a bit reddish. How do you protect your replies? Do you lock them away so the ink keeps its colour? Do you think it's due to exposure to air or to the sun that is causing the fading, or does it fade on purpose, so that we know it isn't auto-penned?

Answer: Ink fades naturally over time, and will change colors. There are a lot of different factors that cause ink to fade: light (both natural and artificial), oxygen, humidity, temperature, type of ink, type of paper, etc.

The biggest thing you can do it keep your autographs out of light.

I store all my letters and cards in binders, in plastic sheet protectors. I use red washi tape to mark the different sections.

They are divided by country, and then British Royals are divided by Royal/Family. In each section, the letters are organized in chronological order, by when I received them. 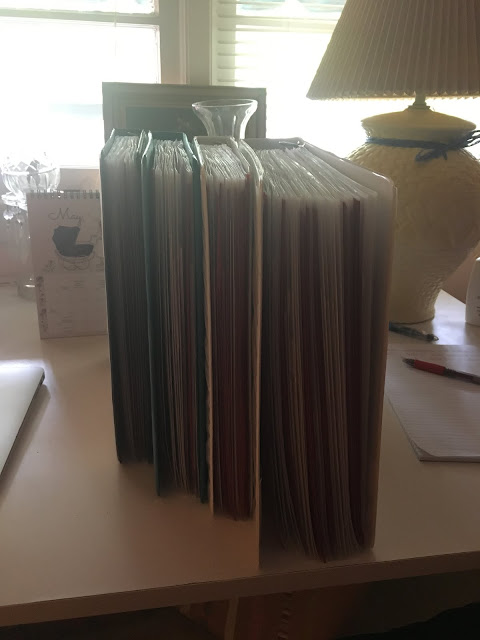 Autopen signatures are written by a machine, but they use the same pens as a person signing it themselves. So they will fade just like a real signature.

Ink from a printed on signature is going to fade just like any printer ink.

Question 11: Can I sign my letter with my first name only? When I write to for example Prince Charles, I always sign with Miss X Y but I want to write to Sarah and I feel like it would look silly to begin my letter as "Dear Sarah" and sign as Miss X Y.

Answer: You can certainly sign your name with just your first name. It's informal and more personal. But at times that's appropriate. I don't think I would do it when writing to the Queen or when doing something official.

I would make sure you have your full name somewhere on the letters. That way they can use your full name on the envelope. And also if they want to store you contact info it's easier with a first and last name.

Usually, I sign my letter and have my name printed underneath.

Answer: Yes, Prince Alois is fine. Other options are:
Question 14: Is Princess Ariane of the Netherlands Her Highness or Her Royal Highness?

Answer: All of King Willem-Alexander and Queen Máxima's children are HRHs (& the King's siblings & their spouses). You do see some HH and other unusual styles with the extended Royal Family. 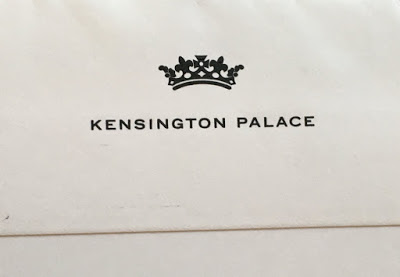 I first saw this black monogram in July last year (Although I had seen some black monograms from way back when their office was at St. James). They have started using it more and more, and it looks like it's here to stay.

I don't think they have a strict policy on when they use the black monogram and when they use the individual ones. I've seen people write for the same event and get different monograms.
at Monday, May 01, 2017