The Queen's Grandchildren Peter, Zara, Beatrice, Eugenie, Louise, & James don't regularly undertake "official" engagements like William or Harry. They are not regularly listed on the CC and do not receive any funding for their charitable work.

They do however attend the occasional official engagement and do work for various charities and organizations. They also hold a number of patronages.

This is a list of the Official Engagements Peter, Zara, Beatrice, Eugenie, Louise, & James attend (e.g. Service of Thanksgiving at St. Paul's Cathedral). This list also includes events they attend as a member of the Royal Family or as Patron of the organization.

We try not to include charity work that related to their job or events they attend in a private capacity, except when they are "official engagements". But it is hard to draw a line between what should be included, and what should not. Also, things are not widely publicized so, undoubtedly, we will miss some things.

How to tell if a story about Harry's love life (Or any royal story) is made up?

There are a number of credible news sites that regularly cover royal events. They have reporters who attend official engagements, get to talk to the Royals, and are in frequent communication with the Royal's press offices.

Ever notice how when there is something important going on that all of these sites report on it?


If everybody, not just gossip rags, is reporting on a story, there is a very good chance that it is true.

If you see that only a few sites, mostly gossip rags, are reporting on a story, you have to ask yourself why is that? The Royals are popular, especially Harry. So, if there are facts about Harry dating someone, all the credible news sites are going to report on it, just like they do with his official engagements.

But at the same time, Prince Harry is popular and the media knows people will click on stories about his love life. This means you might see made up article,s or ones that stretch the truth. There are times where revenue is more important than the truth, or respectfully reporting.

Facts vs. Fiction
Always ask yourself, Who wrote the article? and Are they credible?

When an article uses worlds like reported, allegedly, according to, etc. those words mean this is speculated, or the source is unreliable/questionable.


If it was a fact, the article would present it as fact.

The Foreign media, for the most part, would not find out before the British media.

Foreign media often does not have reporters on the ground in London covering events. They mostly do secondary reporting, meaning they get their facts from other articles. They can often misinterpret things since they don't have expert knowledge, or the connections, that British Royal Reporters have. (Or if you are a gossip rag, you just make it up.)

Harry's friends would not be spilling the beans to the media.
Any news source that quotes an "unnamed friend" is likely made up. The Royals highly value their privacy, their friends know and respect that, that is how they are still the Royal's friend.
Be careful with articles that cite another article as their source.

While the article your reading may be true, they don't have first-hand knowledge of the facts. Always get as close to the source as you can. The article may be selectively quoting or interpreting the facts to fit their story. (If there was a press release from the Palace, try finding that press release.)

When referring to the past, look at articles close to the event.

We think we remember the events clearly, but often we don't realize our memory is a little hazy. The best source is always someone reporting on the event while it's fresh in their mind. Reporting on a past event is like quoting another article, your memory: you might only remember parts, or mix things up.

Prince Nicolas of Sweden will being christened on Sunday, 11th October. He is the 2nd child of Princess Madeline and Christopher O'Neill and 6th in line to the Swedish Throne. He will be almost 4 months old when christened.

The christening will take place at the Royal Chapel at Drottningholm Palace, outside of Stockholm.

The Live Stream and Service will both be in Swedish, but don't worry it's not hard to follow and, of course, a bunch of us will be live Tweeting the whole thing.

Immediate Family (Including Estelle and Leonore), Godparents plus spouses, representatives from Parliament, the Government and Official Sweden.

No Foreign Royals are expected.

In lieu of gifts his parents have asked for donations to two of Princess Madeline's favorite Charities:
http://www.childhood.org
http://www.minstoradag.org

Dress:
Prince Nicolas will be christened in the same dress worn by Victoria, Carl Philip, Madeleine, Estelle, and Leonore at their christenings.

Christening Guests will be in Morning Dress:

You will see the member of the royal family wear their Fmaily Order. Prince Nicolas will be given the Royal Order of the Seraphim uring his christening.

Not sure how much the Live Steam will cover the reception, but we are sure to get some official photographs from inside.

Duchess of Cornwall Get Well Soon!

I wrote to Camilla a few days after Clarence House had announced she was taken ill and had to cancel a number of engagements. She was away from engagements for about 14 days, and has had a light schedule since. Clarence House reported that Camilla had Gastroenteritis, commonly known as the Stomach Flu.

The letter is short, written on A5 paper (half sheet). I assume that everyone who wrote to Camilla, to wish her good health, received the same typed letter. The typed portion doesn't appear to be personalized and only mentions vaguely what I wrote about. Camilla personalized the letter by writing the persons name and hand-signing it. 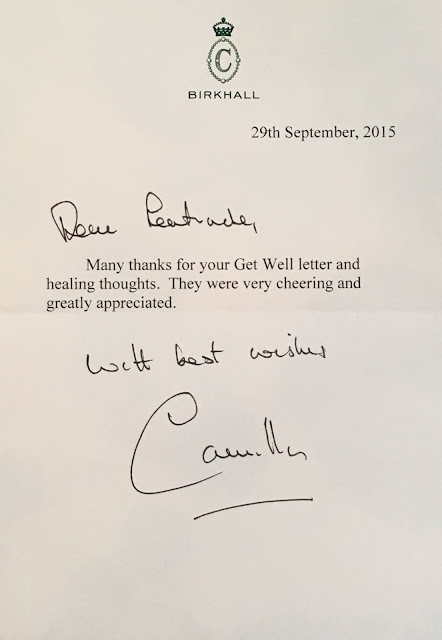 I sent my letter 24 days ago. It was responded to quite promptly.

If you are still waiting for replies from the Cambridges for various events this summer. Those would be handled by the General Correspondence section at Clarence House. They are behind on responses. When will they come? I don't know. To be honest I expected to see responses for at least Prince William's birthday a while ago. But they have been sending out responses, so don't worry, they are just still Pre-William's birthday (Early June).

When Camilla hand-signs letters or cards, my guess is those are handled personally by her office, I.e. a assistant Private Secretary. Which is why we see much quicker response times.
at Tuesday, October 06, 2015

I decided I wanted to start keeping track of Camilla's engagements for 2016. And instead of waiting till January, why not finish up 2015.

(Unconfirmed) - Not Officially Confirmed/ Announced, Yet, but Expected
(Possible) -  Not Confirmed or 100% Expected, but Possible due to past appearances or reports of their attendance


Question 1: Will the Cambridges attend the Royal Variety Performance this year?

Answer: Um...... It's Charles and Camilla's year but they will be on Australia/ New Zealand Tour.... Who knows? The Royal Variety Performance is an annual variety show, usually late November or early December, to raise funds for the Entertainment Artistes' Benevolent Fund which the Queen is patron.

Question 2: Who is Prince Harry dating? Cause I keep seeing articles about him being out with different girls.

Answer: As far as we know Harry is not dating anyone. The media is grasping at straws. Not that he couldn't be dating someone right now, but there aren't any facts to support any of the rumors.

Harry has been seen out with groups of friends a few times since returning from Africa. Just because one of the girls is single or happens to be his Ex-Girlfriend, doesn't mean they are dating. Harry gets linked to a dozen girls each year just because he's seen talking with them ONCE.

If Harry were dating someone we would see them out on multiple occasions and it would be reported on by a good share of the creditable new sites.

Question 3: What is up with the Crib from the Swedish Christening?

Answer: The cradle used by Prince Nicolas during the reception, after the christening, is called the King Karl XV's cradle. It was made for the birth of then Prince Karl in 1826. Today the cradle is only used ceremonially, not for everyday use. At the christening reception the baby sleeps in the cradle while mummy and daddy greet guests. The cradle was used for both Princess Madeleine and Princess Leonore's christening.

Question 4: Are the Cambridges going to attend the China State Banquet?

Answer: There has been no Official Confirmation from Buckingham Palace. Although it has been widely speculated.


Question 5: If William and Kate are the Earl and Countess of Strathearn when in Scotland what are Prince George and Princess Charlotte called?

Answer: George and Charlotte's titles don't change. They are still the Prince and Princess of Cambridge. Just like how Prince Harry is the Prince Henry (Harry) of Wales in Scotland even though his dad is the Duke of Rothesay, same with the York girls, and Wessexs. But Charlotte and George may also simply be referred to as Prince and Princess without the regional distinction.

When Prince George or Prince Harry marry they will get their own titles, usually three to represent different area's in England, Scotland, & Northern Ireland. Then as they travel to the different areas they will use their regional distinction in that area.

Question 6: Why wasn't Kate given the Royal Family Order?

Answer: The Royal Family Order is bestowed by the Monarch to Female member of the BRF.  The Royal Family Order is given at the Queen's discretion. It's not a matter of how long a female is a member of the BRF, but more the role they play. Although Catherine is the wife/mum of the future king, she is not a Full Time Working Royal. She is expected be given the order someday, most likely when she steps into a more full time role.

Each new monarch, has their own Royal Family order, so it is likely Catherine will be given one from each of the next few monarchs: Charles, William, George.

Question 7: I was wondering what you do with all the responses that you get. Do you keep them in an album? (I personally frame some of mine and put them up in my bedroom!!!)

Answer: I have 2 binders with sheet protectors in them. I have my letters all organized, British Royals first, starting with the Queen and working my way down the line of succession, but including spouses. Each Royal or family has their own cover sheet and then all their letters are organized chronologically by when I received them.

It then moves on to Foreign Royals which are separated by Country, in alphabetical order, with all the all letters in each section organized chronologically.

At some point, I might separate things by grouping of years, but I'm not at that point.

P.S I was the girl that wrote this past July about not getting a response back from Charlotte's birth. I'm sad to say I still haven't gotten a reply yet, but I haven't lost hope.

I expected them to much more timely than this, but unfortunately they have been very slow this summer.
at Thursday, October 01, 2015