Princess Adrienne of Sweden will be christened on Friday, June 8th. The day is extra special because it is her parent's 5th wedding anniversary & her older sister Leonore was christened on this day 4 years ago as well.

Adrienne is the 3rd child of Princess Madeleine of Sweden and Chris O'Neil & is 10th in line to the Swedish Throne. She will be just about 3 months old when christened.

The christening will take place at the Royal Chapel at Drottningholm Palace. (Her older sister Leonore & Nicolas as well as cousins, Alexander & Gabriel were also christened there.)

Swedish public service broadcaster, Sveriges Television, will be broadcasting Princess Adrienne's christening. The Live Coverage starts at 11:30 AM. The Live Stream and Service will both be in Swedish, but don't worry it's not hard to follow. And, of course, a bunch of us will be Live Tweeting the whole thing.

11 AM Guests start to arrive at Chapel

In lieu of gifts, the couple have asked for donations to Childhood & Min Stora Dag.

If you are international, donations can also be made to a local children's charity, or to some other cause you support.

Official Christening Pictures should be released within a few days of the ceremony.  There will be a few different combinations of photos:

The replies came in the usual sort of envelope. But what was most interesting is the stamps are from 2002 & 2005, so they are both over a decade old. But was it really cool is they are actually the old stamps you have to lick. Most countries stopped making these kinds of stamps around 2008. 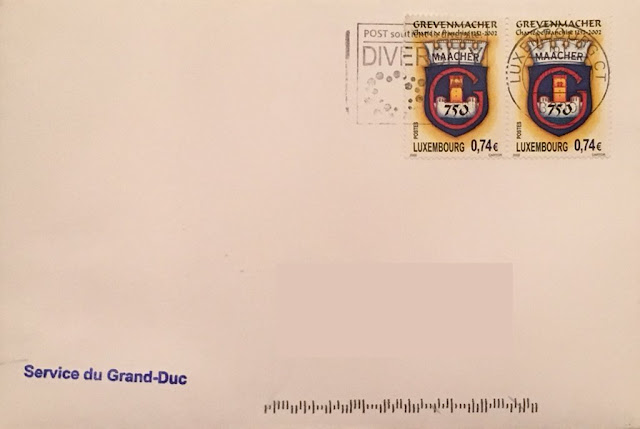 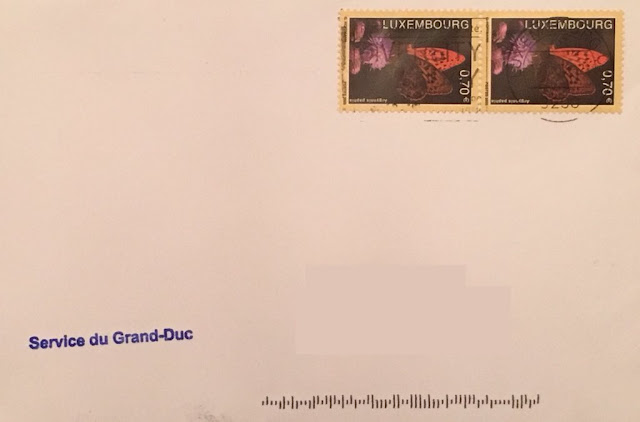 It also interesting to see that the two sets of stamps are for different amounts. I looked it up and the price to mail sometime like this from Luxembourg to USA is 1,30€, so they overpaid with both replies. I assume they were just trying to use up their old stamps and weren't too worried about overpaying. 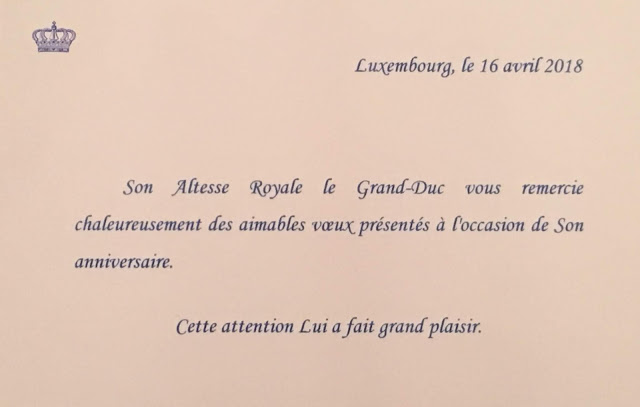 Luxembourg, 16th April 2018
His Royal Highness the Grand Duke warmly thanks you for the kind wishes on the occasion of his birthday.

This attention gave him great pleasure. 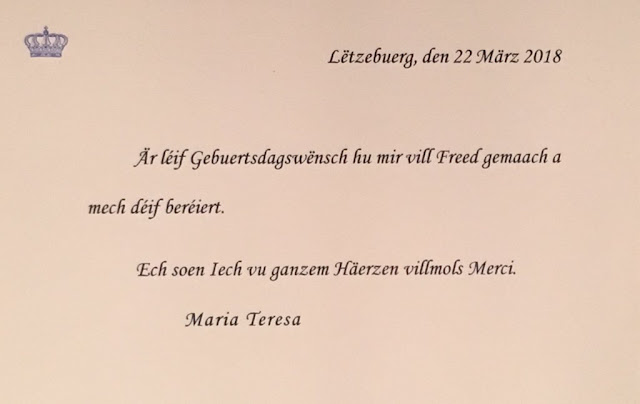 Your dear birthday wishes have given me much joy and touched me deeply.

I thank you very much with all my heart.

You will notice in addition to being in different languages, the two replies are formatted a little differently (color, 1st person vs. 3rd person, title vs. name, etc.). That is just the Luxembourg Royals. While they always reply with a flat card, they do not have a consistent format or style.

You will notice both replies are dated with the Royal's birthday.

Also Check Out:
Other Replies
Writing to the Royals
at Thursday, May 24, 2018

Send your Congratulations to Harry & Meghan for their Wedding!

The Royals absolutely love to get letters and cards from the public, and special occasions like a Royal Wedding is no different!

Writing for the 1st time?

I would write after the wedding, as you may want to comment on the events, and your feelings about everything. And don't worry if you don't get your letter out right away. A week or two after the event is a very acceptable time frame to send your congratulations. (& honestly, given how much mail they are going to receive, a slightly latter reply is fine.)

How to Address the couple?

After their wedding, Prince Harry & Meghan Meghan will officially be known as "TRH the Duke & Duchess of ___." There are a lot of different ways you can address the couple in your letter, depending on if you want to be more formal and correct or more informal and every day. As long as you are being respectful and thoughtful, it is hard to go wrong. Here are just a few options:

Personally, I prefer the more formal approach and use "TRH Duke & Duchess of Sussex" on the envelope & open my letter with "Dear Your Royal Highnesses,".

I would avoid both:

The Royals won't be mad if you use either of these, but neither are correct post-wedding.


Where to send your letter/card to?

Why Clarence House, not Kensington Palace?

What to write?
Write whatever you feel like writing about. There is no one right answer. As long as you are being respectful and thoughtful, it is hard to go wrong.

You can send them a card or letter with a short, simple acknowledgement. Or you can gush about your feelings about the wedding and how amazing this and that was. (But do keep you letter to 1 page max!)

Can I send a Gift?

Harry & Meghan have asked that well-wishers donate to charity in lieu of sending a gift. They have even recomended 7 charities to donate to, although you can choose instead to donate to another charity of your choosing.

You can find details about the 7 chosen charities here.

And yes, it is perfectly fine to mention in your letter/card that you made a donation on their behalf to charity. They would love to hear about it.

Harry & Meghan are going to get hundreds of letters and card from well-wishers congratulating them on their wedding. While they would love to send a personal thank you to everyone, that is just not possible.

Instead, they will reply with their usual postcard sized photo with a typed message on the back, like they did with their engagement reply. 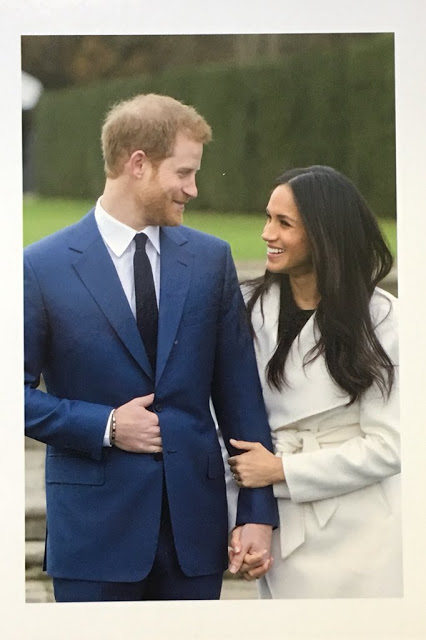 Expect a much longer response time than usual! (I would expect at least 2-4 month, but it could even take as long as 6 months. And as always, they reply to letters as they get to them. So, just because someone got a reply, doesn't mean you will get yours in the next few days or weeks. It takes months to get through all the mail for a major event like this.)

There are A LOT of Royal Wedding Viewing options out there: TV, Radio, Apps, online streaming services, etc. I'm just keeping this list to free, online live streams, you don't need to log into any sort of account for. We will be updating as sites post their live stream links. Should anyone have a link to another live stream, feel free to share it with us.

All times are for London/Windsor! (See our Royal Wedding Schedule with time zone converter for your local time.)

We aren't 100% sure all of these will be available internationally, as there are sometimes country restrictions. Live Streams in Foreign Languages at the bottom of the Page.

Crown Prince Frederik of Denmark is turning 50 on May 26th. To celebrate this milestone birthday there will be a week of events in Denmark. Of course, the most exciting event will be the Gala Banquet on May 26th, which will be attended by a handful of foreign Royals.

A reply arrived earlier this week from Denmark. I had written to Queen Margrethe for her 78th Birthday last month.

The reply is the typical from Queen Margrethe, a form letter written by Aide-de-camp. The message is the same as last year. 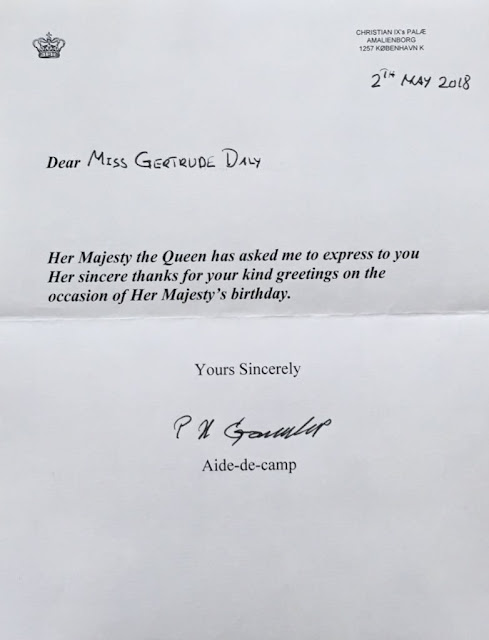 Also Check Out:
Other Replies
Writing to the Royals
at Thursday, May 10, 2018