The envelope is the standard one from the Gloucesters. Unlike the other British Royal, the Gloucesters doesn't have a monogrammed envelope. Instead, they stamp their envelope to mark where it came from. Part of this decision is likely because they get their envelopes from a different supplier than most of the other British royals. The Gloucesters use Conqueror by Arjowiggins. Most of the other Royals use Wren Press, which holds a royal warrant from the Queen & Prince Charles. 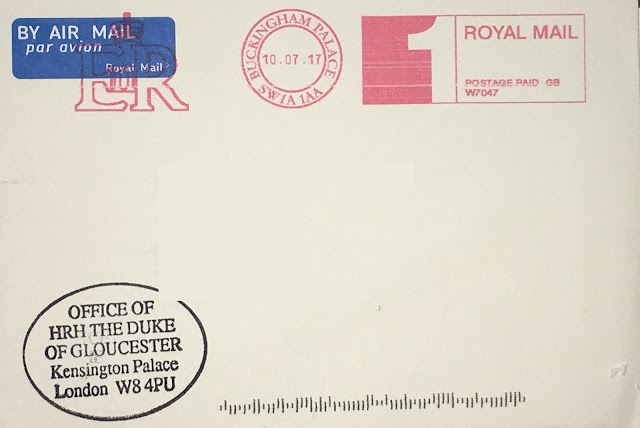 The Duke and Duchess share an office, so the Duchess doesn't have a separate stamp.

The card has a simple, generic pre-typed message, that could be used for a lot of different things. The monogram is a crown with an intertwined R & B, the Duke & Duchess's initials (Richard & Birgitte). We don't see the British Royals use joint monograms often, so this is nice. This is the first reply I have gotten from the Gloucesters with their joint monogram. 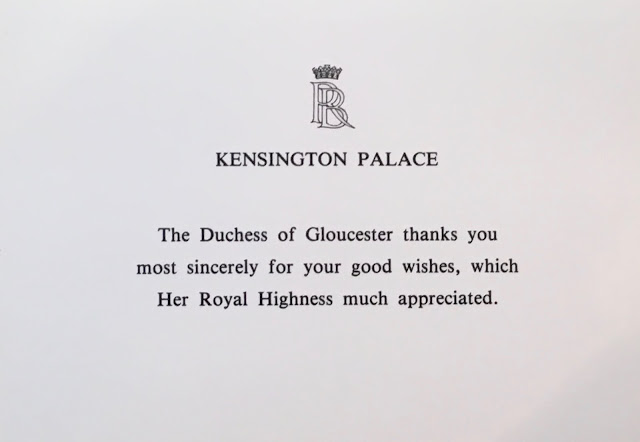 It's interesting to compare the different birthday replies from the Duchess over the years. In 2015, I got a personal letter in reply. In 2016, I got a form letter about her birthday. And this year a generic "thank you" card.

It is not unusual to see Royal send out both personal and generic replies.They get so much mail they can't send out a personal reply to everyone who writes, so most get a generic form reply. But many Royal offices do try to send out a few personal replies to some of the more touching letters and cards.

The card's text & monogram are embossed (raised), which is lovely! It gives the card a very nice feel. I think it is an especially nice touch that the message is the same font as the monogram.

I got this reply at the beginning of the month. Sorry, I've been a bit lazy about making a post. I had written to Queen Margrethe & Prince Henrik for their 50th wedding anniversary, last month.

It's a typical reply from Queen Margrethe. It's a form letter. They filled in my name, and which ever aide-de-camp was working that day signed it. 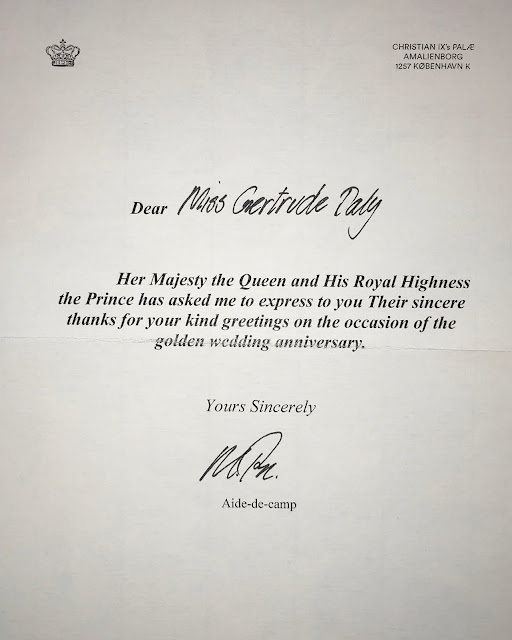 Obviously, Prince Henrik is in our thoughts right now as he was hospitalized on Thursday with a leg infection from a wound. Henrik had Angioplasty surgery on Monday. The surgery helped clear a blocked artery, which was probably making the infection a lot worse. Prince Henrik is expected to be released tomorrow (Wednesday).

Also Check Out:
Other Replies
Writing to the Royals
at Tuesday, July 18, 2017

Prince William & Duchess Kate are going on a tour of Germany & Poland later this month. Prince George & Princess Charlotte will accompany them!

Question 1: Do you know exactly at what time Duke and Duchess of Cambridge will start their royal tour in Warsaw? I have to know at what time to appearance there.

Answer: All we have been told is they arrive mid-day. Usually, shortly beforehand local media and officials announce a good time & place to spot the royals during the visit. So I would look out for that.

Question 2: I will be meeting Duke and Duchess of Cambridge. I want to give them an interesting and unique present, but I have no idea what I should give them. Do you have any ideas?

Answer: That is a difficult question. What do you give people who have everything?

You can read the Royals policy on gifts here.

I assume your meeting the Duke & Duchess in an official way. So something connected to the work you are doing could be nice: maybe a t-shirt from your organization, or a small scrapbook of photos and press clippings from your project.

Or something connected to your visit: an ornament of your city's landmark, or a picture frame with your city's name on it.

Flowers are also always good, teddy bear, a nice letter (include your return address on the letter & you likely will get a thank you from a member of staff), etc.

Question 3: Would it be a good idea to write to Prince George for his first day of school?


Answer: Sure! You could write to Prince George, or Will & Kate, for Geroge's 1st day of school. George's 1st day will be in early September.

You could send your letter before his 1st day to wish him good luck. Or you could write after to congratulate him on it and wish him a happy school year.

I'm probably going to write after his 1st day because I feel like I will have more to say.

I feel like if you write beforehand, sending it in late August, you might of well just said what you wanted to in a birthday letter to George. I see little point in sending two letters to the same person is the space of a month if you don't need to.

Question 4: What is your favourite Royal Reply from this year?


Answer: That is a difficult question.

I would have to say either the hand-written note by Prince Edward, Earl of Wessex's private secretary, because who doesn't love a hand-written, personal note.

Or the Thank You card for my condolences for Prince Richard von Sayn-Wittgenstein-Berleburg's passing. Obviously, it is a sad piece of mail. But it also feels like a piece of history and will be a very lovely piece to remember Prince Richard by.

Question 5: Do you know the protocol for Prince Philip when he is meeting King? During the Spanish State Visit, I saw Prince Charles bow to King Felipe, but I didn't catch Prince Philip meeting him. I also noticed that Queen Letizia didn't curtsey to the Queen, but wondered if the age of Elizabeth and/or Philip played any part of proper greetings.


Answer: Monarchs don't normally bow to each other, and when both have their spouse I think the spouse sort of takes on the Monarch's level. I didn't really see much difference between how one greets Monarch vs. the spouse. But there can be a bit.

A lot of it depends on how friendly the Royals are, have they met before, are they related, the gender of the two people, etc. Age plays a part a bit, but it's more their history and relationship. Also, height difference makes things awkward, if I have to bend down to kiss your cheek does it count as a bow/curtsy.

Also how formal the greeting depends on the type of event. Tiaras and ball gowns are going to be a lot more formal than day-time events. Also, it depends on if they have met earlier that day or visit. 2nd greetings are often less formal. The location also plays a part, who is the guest vs. host, who is arriving and who is already there, etc.

But I don't think there is a very strict way of greeting, we've seen a lot of combinations of handshakes, kisses, hugs, head nods, bows, etc. But obviously, the Monarch ranks above Royal.

Looking back at some videos, this is what I noticed:


Meeting Queen Letizia
Question 6: How can you tell the difference between auto-penned vs. printed vs. handwritten signatures on letters?

Answer: I went into the differences about this in the February 2017 Q&A, Question #4.

It can be difficult at times. Most anything from a royal is going to be printed or auto-penned. If it's staff writing it's likely handwritten. Although I have seen auto-penned and printed signatures for staff.

The only signed replies I've gotten are Duchess Camilla and the Liechtenstein Royals. Hand-signing things are just sort of how they normally handle mail.
at Sunday, July 02, 2017