Embed from Getty Images
Day 4 (4) - Tuesday 27th (Kelowna, BC and Whitehorse, Yukon)
(Night away from George and Charlotte)

Day 6 (1) - Thursday 29th  (Victoria, BC)
(Rest of the Day will be spent Privately with George and Charlotte)

A new piece of Royal Mail! This time from Denmark.

I had written for Crown Prince Frederik's 48th birthday in May. The Crown Prince Couple always send the same very basic replies, so there isn't much to say. 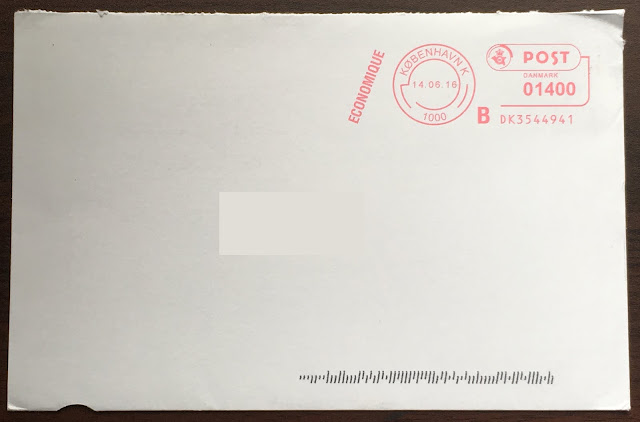 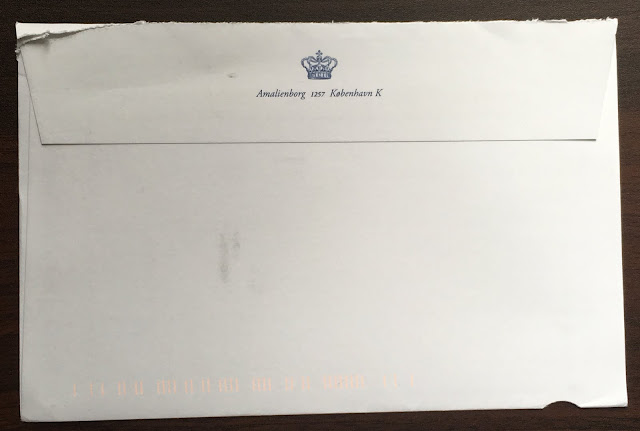 The reply was sent last month, and took almost month to arrive. The Crown Prince Couple are the only royals I know who send mail economy, which means it can take awhile for it to arrive. From the front of the envelope we can tell that this letter is from one of the British Royals. The postmark "Buckingham Palace" is used on almost all royal mail, regardless of what residence it is sent from. We have even seen it on mail from Scotland. (Buckingham Palace on the postmark just refers to the post office where the letters were stamped/franked.) 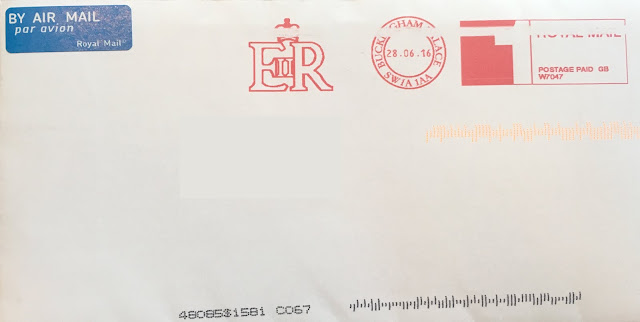 With the British Royals, you can usually tell who the letter is from by the monogram on the back of the envelope. The back of this envelope has a black crown with the words "Kensington Palace" written underneath. 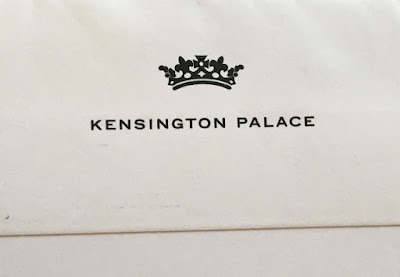 I have never gotten a piece of mail with this monogram on the back, although I do recognise it.

The Royals all use different monograms, but a sharp eye will notice that William, Catherine and Harry's Monograms all use the same crown. And that it is the same crown used on this envelope.  That means this letter has to be from one of them. We have seen this smilar design used years ago, when their office was at St. James.

The letter inside is in reply to my Birthday Letter to Prince William. 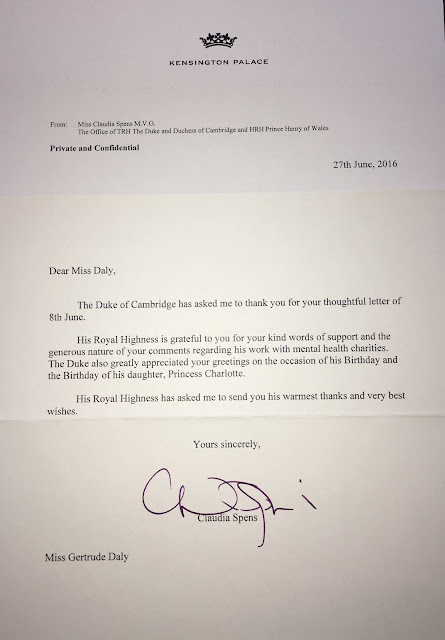 This is a personalised letter. It mentions specific things about my letter: my comments on his work with mental health charities, his birthday and Charlotte's birthday.

I love the phrase "Generous Nature"! I talked in my letter about William's work on mental health, & specifically his new Anti-bullying campaign. I also talked more generally about William, Catherine and Harry's work.

Normally I don't like to go into what exactly I wrote, but I found a copy of my letter in my laptop and was looking over it as I wrote this blog post. And because this part was really cute I thought I would share it with you:

"... I would like to point out that your “Dad” is totally showing. I can’t help but look at these causes, and the other ones you and Catherine support and think about Prince George and Princess Charlotte. It seems quite obvious that you are doing this, in part,  for your own children and their future..."

Obviously, this is not the typical photo reply we see from the Cambridges

I know other people have gotten the usual photo birthday reply for Prince William's Birthday this year. They said it is the same as last years.

For any event, there are always letters that get replied to more personally. Obviously, there are a lot of factors that go into who gets a more personal reply and who gets the generic reply. Part of it is just luck. They can't personally reply to everyone, even if they get a bunch of amazing, thoughtful letters.

My advice is to always make your letter a bit personal. Don't just mention general things, like the Royal does great work and that it is important, mention specifics. Another little except from my letter:

"[Talk about William, Catherine & Harry's work, then] ...What I especially admire is your new Anti-Bullying task-force and the Head Start campaign. They both seem like incredible projects. And although they are obviously relevant for all ages, they are very important for young adults.... [I then went on to talk about young adults and mental health]."

(Update: They have since used the Black Kensington Palace stationary more often. I think most of the letters from Clarence House's correspondence section use it now. And we will mainly see William's red "W", Kate's yellow "C" for Catherine, and Harry's blue "H" on letters from their private secretary.)

We have gotten a few replies written from Miss Spens before, and you can see the differences:
(Notice the name of the office) 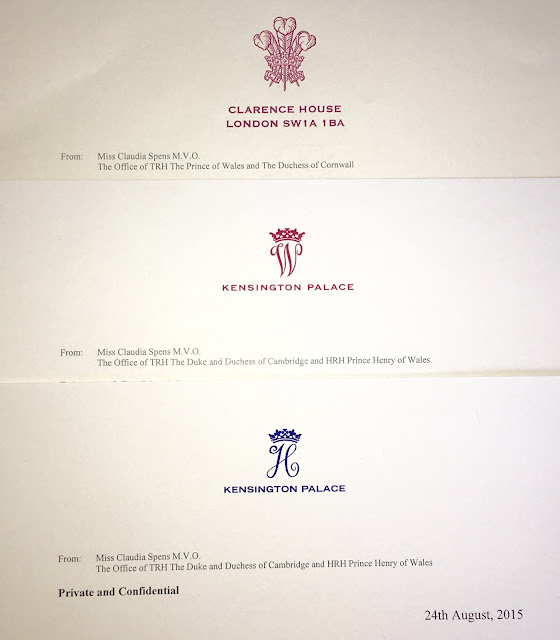 Miss Spens and the other people in the Correspondence Section are the ones sending out the typical photo replies.

Even though the letter is sent from Clarence House, they use the Royal's Stationary. William's stationary says Kensington Palace, since that is where his office/residence is. The name of the office changes as well (Office of Charles & Camilla vs. Cambridges & Harry), despite the fact that Miss Spens is always working at Clarence House.

Back to Rio 2016 Olympics Main Page

Did you know if you go to the "Calendar" Tab and click on past months you can look at Past Q&As!
You can check out Last July's Q&A here.

Question 1:  I was wondering if you knew if Diana, Princess of Wales used Montblanc pens to write with?

Embed from Getty Images
Answer: Montblanc has really beautiful, well-crafted, luxury pens which are used by diplomats and royals around the world. So I wouldn't be surprised if Diana used one.

We have seen the both the Queen and Prince Charles use Montblanc pens in the past. Montblanc even created a special pen for Prince Albert and Princess Charlene of Monaco's royal wedding to sign their wedding registry with.

However, Parker Pen Company holds a Royal Warrant from both the Queen and Prince Charles, so I would expect she used Parker Pens alot.

Question 2:  If I want to send a letter to Prince George for his birthday, is it Prince George and then the address or must I send it to Kate or William?

Answer: The Address is:

Who you address it to specifically depends on who you are writing to. Yes, it is for George's Birthday, but most people are really writing to Will and Kate. Unless your letter/card is actually meant for a 3 year old. I normally send it to "Duke and Duchess of Cambridge".

But there is no wrong answer. Regardless of who you address the letter to, George or his parents, you will get the same response. And the response will be send by his Parents.

Question 3: When does the Queen get back to Buckingham Palace after her summer holiday?

Question 4: Do you think the new Prime Minister May will visit the Queen at Balmoral?


Answer: Yes, I would expect so. The Queen has a number of honored guests visit her at Balmoral each summer. The Prime Minister traditional spends a few days there.
at Friday, July 01, 2016