A reply arrived today from Belgium!

I had written to Prince Laurent and Princess Claire (King Philippe's brother and sister-in-law) to congratulate them on their 15th Wedding anniversary.

They replied with a typical Belgium Royal Evelope (or a typical as it can be given the many different versions). The front features a purple crown with Palais de Bruxelles/Palace of Brussels written underneath.

I love the fancy font of the address. It is something we see ocassionally from the Belgium Royals. 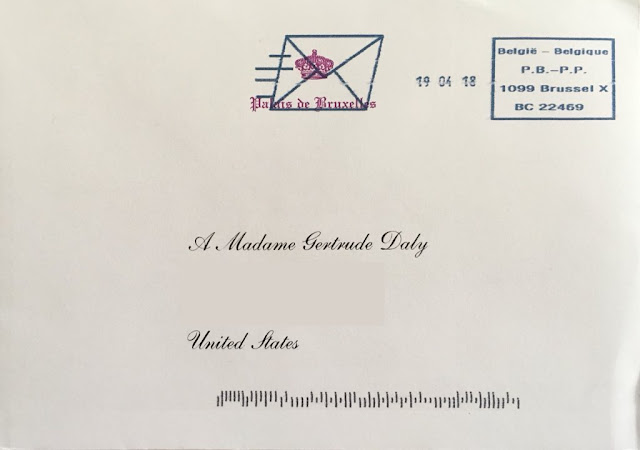 Inside is the typical flat card. 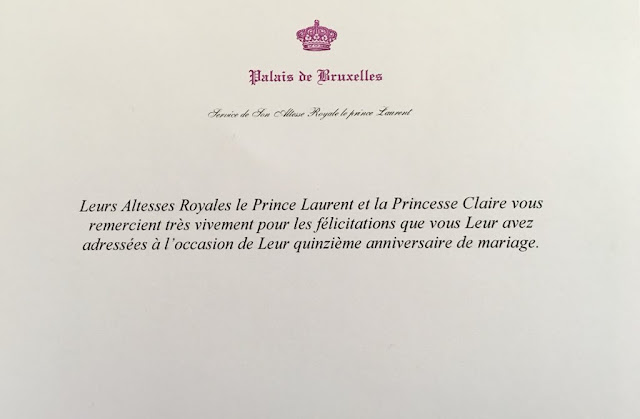 
Palace of Brussels
Service of His Royal Highness Prince Laurent

Their Royal Highnesses Prince Laurent and Princess Claire thank you very much for the congratulations you sent them on the occasion of their fifteenth wedding anniversary.

Also Check Out:
Other Replies
Writing to the Royals
at Thursday, April 26, 2018

Congratulating the Cambridges on the birth of their 2nd Son!

If you would like to congratulate the Cambridges on the birth of their new born son, you can write to them at:


Why Clarence House, not Kensington Palace?

For more info on Writing to the Royals check out our helpful guide. It has everything you need to know.

They should reply with their usual postcard sized photo with typed message on the back. Expect longer response times, as they will be getting a lot more mail than usual! (With Charlotte I know it took them at least 4 months to send out all the replies, and could very well be longer with all the mail for Harry's wedding!)

Their response from Charlotte's birth: 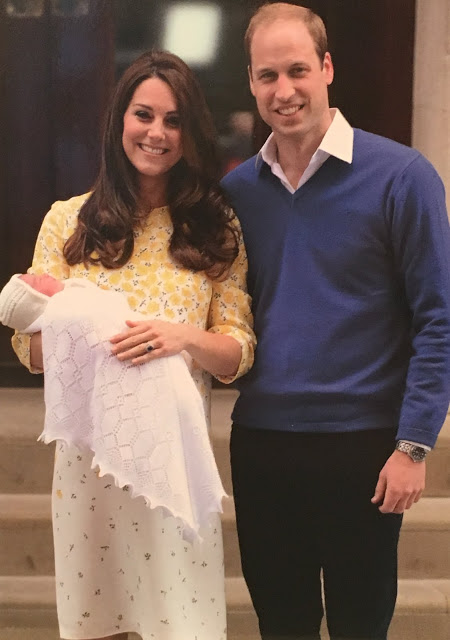 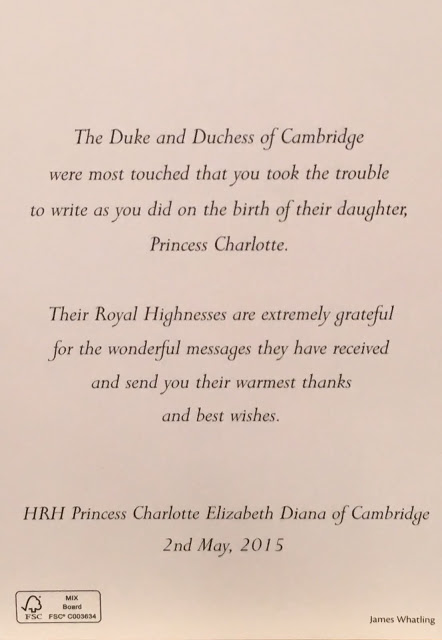 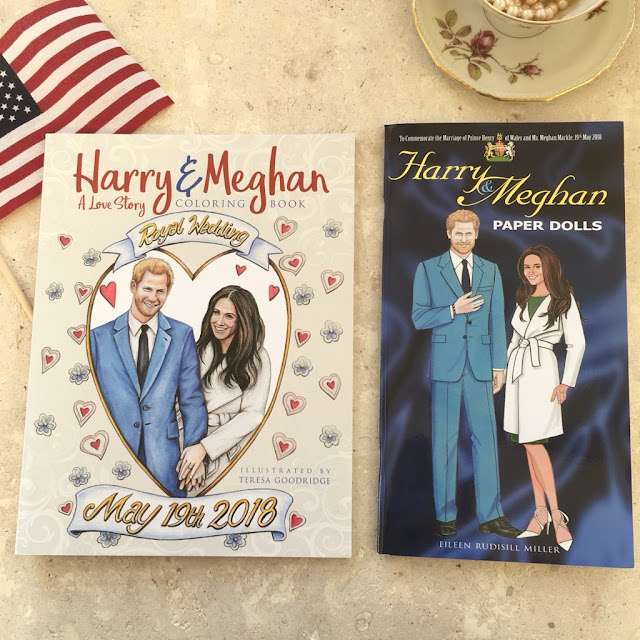 Dover Publications is releasing two new books in honour of Prince Harry & Meghan Markle's wedding on May 19th! And is giving away 2 copies to Gert's Royal readers! (Details on how to enter & a 25% off code at bottom of page.)

Here is a cute little video of the two books:

The coloring book is a mix of a few iconic scenes of the couple and a lot of Royal Wedding day-dreaming. (Some of the scenes are reminiscent of William & Kate's Engagement & Wedding Photos). Each of the 30 pages is beautifully drawn. You can daydream about Harry & Meghan on a romantic horseback ride, in a rowboat on a picturesque lake, or driving away from their wedding reception in Prince Charles' Aston Martin. 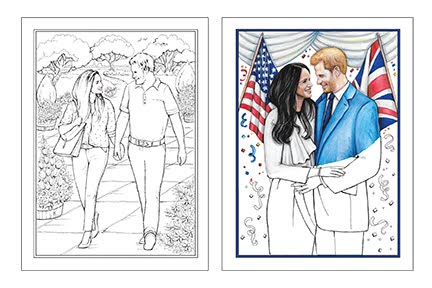 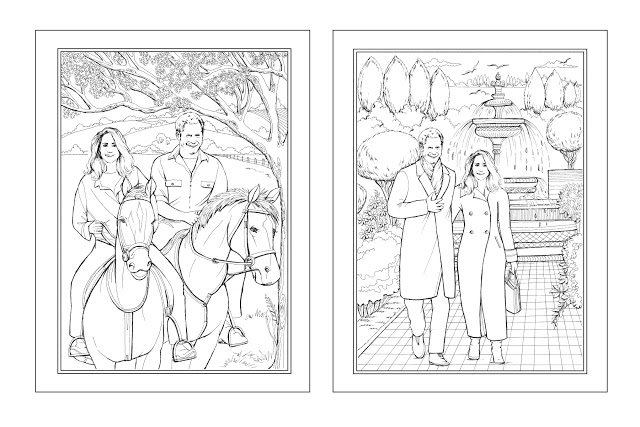 (Did you know Duchess Kate is a fan of Coloring books? William spilled the beans to a famous illustrator at an investiture in 2016.)

Ever wanted to act out your favourite Royal Moments? Now you can with the Prince Harry & Meghan Markle Paper Dolls. The Paper Dolls feature outfits from Harry & Meghan's iconic moments together. I especially enjoy that they included the coat-on & coat-off versions of their outfits. (Including, some dresses we never got a good look at on Meghan, because they were hidden under her coat.) 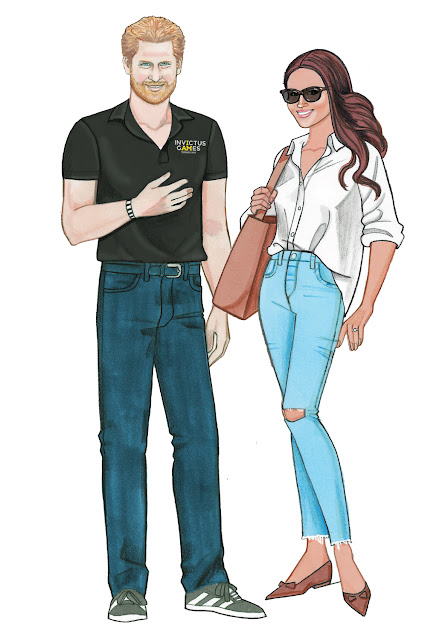 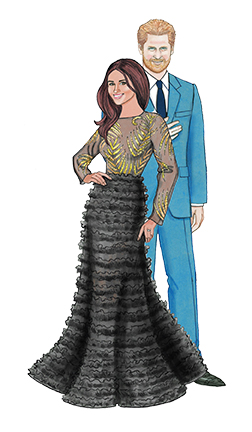 Win a free copy of either Harry and Meghan: A Love Story Coloring Book or Harry and Meghan Paper Dolls! Contest ends April 28th at 11:59 PM (London), and the winners will be chosen at random. (Open to USA & International)

Thank you to everyone who entered out Royal Wedding Book Giveaway! You had a lot of different ways to describe Harry and Meghan as a couple, but here are the most common terms. 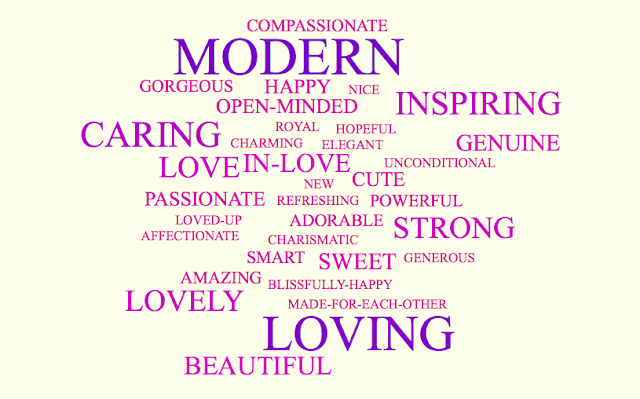 Our two winners, chosen at random, are @jenhuelsebusch (on Twitter) & @Michilyons (on Instagram)! They both came up with some pretty awesome words describe Harry and Meghan!

Dover Publishing is giving Gert's Royals Readers 25% off both books through May 31st! Just use the code WDBB!

Shortly after:
4 PM
5 PM
Later that Day/Day after:
In the days after:
May 2nd:

I reply arrived today from Liechtenstein. I had written to Princess Marie for her 78th Birthday. 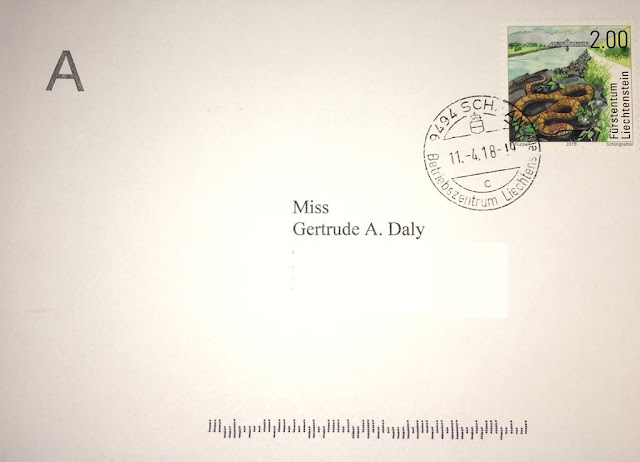 It's the ususal Birthday reply from the Liechtenstein Royal Family: pre-made message, lovely embossed coat of arms at the top, textured edge and signature. 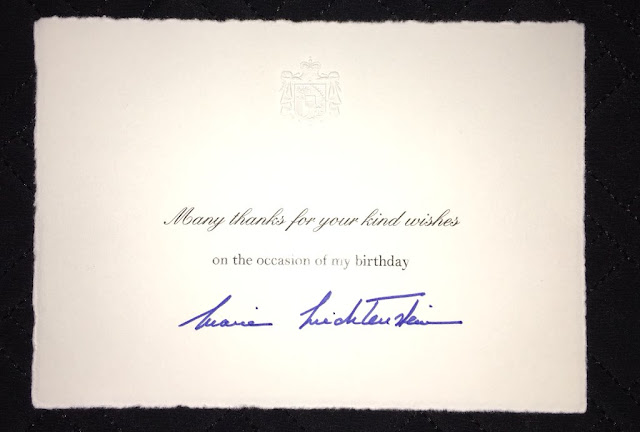 Also Check Out:
Other Replies
Writing to the Royals
at Tuesday, April 17, 2018

A reply arrived today from Monaco for the letter I sent Prince Albert for his 60th Birthday. The reply is similar to his past birthday replies.

The envelope features a postmark celebrating the 50th Annivesary of the P.E.N. Club of Monaco. The P.E.N. Club is an international organization of Poets, Playwrights, Editors, Essayists, and Novelists. The envelope also features a stamp commemtating the 2017 Monte-Carlos International Circus Festival, which Princess Stephanie is president of, and a stamp of an Anthias Anthias fish (commonly known as the swallowtail seaperch) which is native to the Mediterranean Sea, where Monaco is located.

The reply is the usual flat card, with Prince Albert's Monogram embossed. As always, the card is dated with Prince Albert's Birthday. They have changed up the message slightly year to year. Unlike Princess Charlene's birthday replies, Prince Albert's are not always bi-lingual. But of course, there is a french version of the reply they can send out. The signature is printed on.

You will probably notice the lines on the paper. It is called Laid. It is from the paper manfacturing process. Laid Paper is an older paper making technique that was orignially done by hand with wire screens, that created the distintive line. I really like it becuse it give the paper a really nice teature and feel. And, as it is a more expensive process, it's usually higher quality paper.


Also Check Out:
Other Replies
Writing to the Royals
at Monday, April 09, 2018

A letter arrived from the UK today for the Birthday wishes I sent Princess Eugenie of York. Like ususal the Duke of York's office replied with a simple letter. The message is similar to past years. And as far as I've seen everyone who wrote to Eugenie for her birthday this year got the same message. 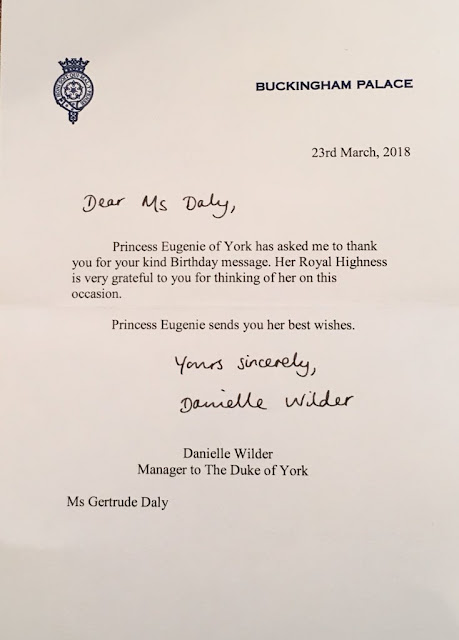 The letter is written by Danielle Wilder, who is a new addition to the Duke of York's Office, althougth she's worked for the Royals for many years.

Also Check Out:
Other Replies
Writing to the Royals
at Wednesday, April 04, 2018

Question 1: Would it be appropriate to send a letter to Prince Philip for his surgery?

Answer: Yes, it is very appropriate to send a letter or card wishing someone a speedy recovery after a surgery and letting them know that they are in your thoughts and prayers. I think people really enjoy the show of concern and love during what can be a difficult time.

Question 2: Did Kate and Will send out wedding thank yous? What did they look like?

Answer: I didn't start writing to the Royals until Prince George's 1st birthday, so I don't have a reply from their wedding. But I have seen a copy, it was the usual postcard-size photo reply, a picture from their wedding, with a message on the back.

And I would expect the same with Harry & Meghan's wedding.

Question 3: I am a U.S. citizen, who went to college in England and have spent a large chunk of my adult life there. I am fascinated with the royals and have written to them before, however, I don’t know if a letter I have in mind is appropriate. Here in the U.S. our government has a system with the presidents that if you get married, or in my case have a child, you can write the president and get a signed congratulations back. I had my first child about 6 months ago, and I have received a signed letter from our current president and all living past presidents and Pope Francis. I know the Royals do not sign anything, however, I was wondering if it would be appropriate if when writing to Kate congratulating her on the birth of her child, if it would be appropriate to mention my own child’s birth? Also, if I did mention it, would they acknowledge it? I will send her a letter regardless the on day.

Answer: The British Royals do have a program where people can get a signed birthday or anniversary message from the Queen. But sadly it is only open to British & Commonwealth Citizens & only for certain milestones:

And that's all they do. They get too much mail to send personal messages for other occasions no matter how nicely you ask.

But as to writing to Kate, it would be very appropriate to mention in your letter that you had a child yourself 6 months ago. Will you get a reply from Kate? no. You will just get the postcard-sized photo with pre-made message they send to everyone.

Question 4: I would like to know how and where you preserve the answers on?

Answer: We went into this in our March Q&A, see Question #6

Question 5:  If you write to the Royals do you ever send a card or do you only write Letters?

Question 6:  Hi! Was wondering why the commentators on wedding day referred to Peter Phillips as "The Queen's favorite grandson."I find it hard to believe she would have a favorite, much less say so.

Answer: The Queen has never said anything about having a favorite anything, and I doubt she has one. This is just speculation & in fact, there are different stories that call different royals her favorite. It's just a way for the media to denote, the close relationship with that particular royals.

Question 7a:  Do you write to the Royals for every event? Or just write to your favorite Royals. Does it annoy you when you haven't written and see a great reply on Instagram?

Answer: I don't write for every event. I have a calendar with Royal Birthday, I probably don't even write for half of those. & there are many many other royals who didn't even make it onto that calendar since I try to keep the list under 110 people.

I have my favorite royals who I write to every year for their birthday. Then for the other more important royals I will write if it's a milestone birthday.

I write if it's a milestone Wedding Anniversary. For Christmas, I usually just write to the important British royals, European monarchs, and then a few of my favorites.

I could write a lot more often to a lot more people, but I just don't have the time, interest or patience.

I do definitely get jealous when I see a great reply on social media that I didn't get. It especially hurts when I wrote as well and didn't get a reply, or it was one of those royals I thought wasn't going to reply, so I didn't bother writing.

Question 7b: as an example: Do you write for all the Birthdays of the family of Princess Madeleine, to the trooping the colour for the Queen or to different Events in other Royal Families.

What I write for definitely varies from Royal family to family, based on who's my favourites and how likely they are to respond. For the Swedish Royal Family, given that they very rarely reply, I don't normally write for birthdays at all, unless it is a milestone birthday.

I don't write for Trooping the Colours (AKA the Queen's Offical Birthday), instead, I send my birthday letter for the Queen in April, for her actual birthday.

Question 8:  Will you cover other European Royal families? Like the Norwegian?

Answer: I do already cover the other European royal families somewhat. Mostly for their big stuff.