So I've been a little busy lately..... I never got around to posting these 3 replies.... So here is a quick post.

First is from Luxembourg, from the Grand Duke and Grand Duchess, who celebrated their 35th Wedding Anniversary in February. Their civil wedding was on 4th February 1981 and their religious ceremony was on Valentine's Day 1981. 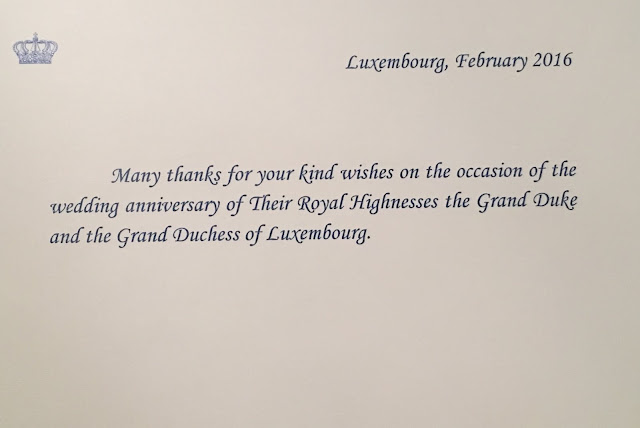 The Envelope is postmarked February 25th, so it took them a few weeks to reply to my letter.

This is only the 2nd time I had ever written to Luxembourg. The reply is similar to the reply I got from Grand Duke Jean for his 90th Birthday in January.


***
The 2nd piece of mail is from King Harald of Norway. It is a half sheet letter and looks exactly like the other letter I had received from Norway. 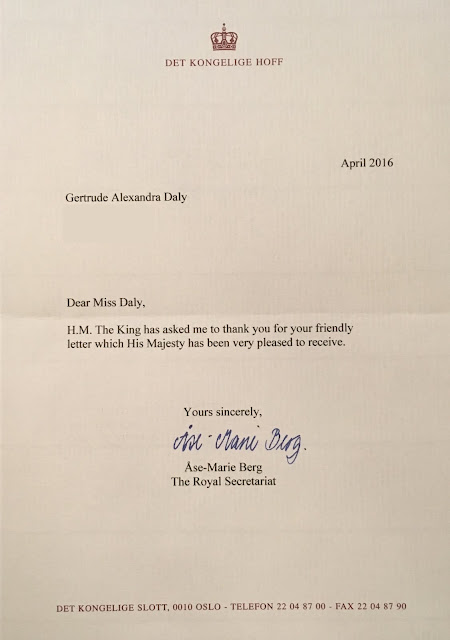 It's nice, but it doesn't mention why I wrote. Which was confusing because I had sent three letters over a few months, Christmas, Silver Jubilee (January), and his 79th Birthday (February) and hadn't received any replies.

I was able to figure out that this was in reply to my birthday letter since I had moved in Late January, so only the birthday reply would have my new address.

Queen Sonja's Birthday Reply last year did mention that I had written for her birthday.

The words "friendly letter" made me smile. Usually, they just write "your letter" or thank you for your "kind wishes."

The letter is hand signed by Åse-Marie Berg, who is one of the Palace's Royal Secretariats.  Royal Secretariat is a department in the Royal Household. They organize engagements, responding to invitations, answering correspondences, etc. Should not be confused with a Private Secretary.

The envelope is postmarked 16 April, just under two months after his birthday.


****
The third reply is from King Willem-Alexander of the Netherlands. He turned 49 on 27th April. It's a pretty basic reply. 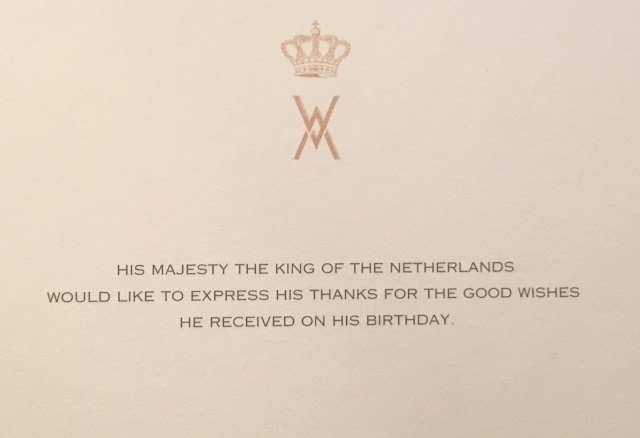 The envelope is postmarked May 17th. So the reply was sent just under a month after his birthday.

Each reply I've gotten from the Netherlands so far has been different.