I had written to the Duchess of Gloucester for her 70th birthday earlier this month, June 20th. This was a great response time. It arrived a little less than a month after I sent my letter.

You will notice that the letter and envelope are dated June 24th, a few days after her birthday, meaning her office is right on top of things. Which is always great. 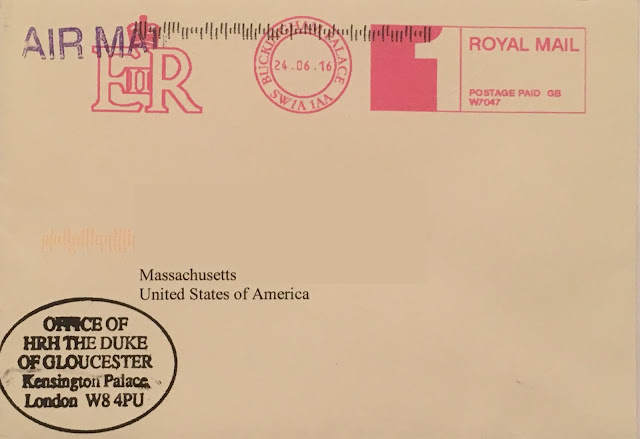 Two interesting things about the envelope:

The 1st interesting thing is the envelope had the wrong address. Most of my address is correct, except for the name of the State. My guess is they read the name of the city and thought Massachusetts. Massachusetts has a city with the same name as mine, which it is much more famous
(and definitely more recognisable for a Brit, since it was named after a city in England).

The US Postal Service had no problem getting the letter to me, and there wasn't even a delay since the other info was all correct and doesn't exist in Massachusetts (Street name, postcode, etc). This, however, is a good lesson: make sure to write your address very clearly.

The Gloucesters use Conqueror stationary, which is popular among a number of foreign royals (Monaco, Norway). Most of the other British royals use Wren Press, which holds a Royal Warrant from both the Queen and Prince Charles. The Gloucesters using different stationary doesn't mean anything significant, it is just their personal taste in paper.

I personally like Conqueror better. But that is probably because Monaco uses it and they send the nicest replies (In My Opinion).

The letter was written by the Duchess's Lady-in-Waiting, Mrs. Lucinda Baker.  Pardon the smudged name that was all me! 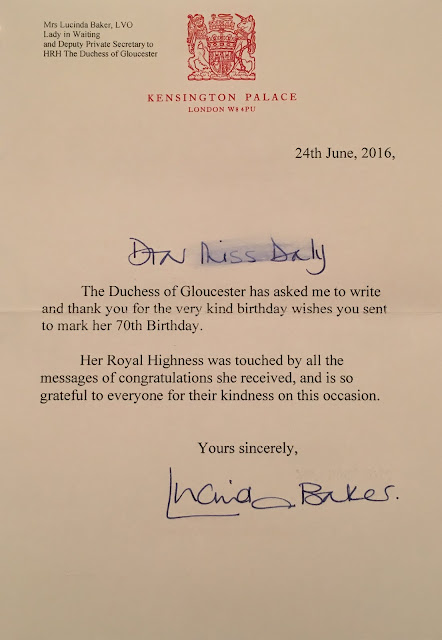 This is a form letter. You can tell since it is generic, and could be used for anybody who wrote for the Duchess's birthday. No part is specific to me.

Last year's Birthday response was a bit more personal and written for me. You can tell since it mentions specifically what I wrote about in my letter, and has my name printed at the bottom.

A little difference I noticed in this letter compared to last year's is three little letter on the top left of the page, LVO. Mrs. Lucinda Baker was made a Lieutenant of the Royal Victorian Order for the Queen's 2016 New Years Honors.

Something I always look out for is the fold in the paper. You will notice the text isn't perfectly formatted so the fold falls between the paragraphs. Formatting the letter just right so, so it doesn't fold over any text is hard to do. When you do see it, you can tell that person took great care. This is also why the body of the letter is usually in the middle of the page.

NOTE: The Royal Summer holidays are fast approaching. This means little engagements, few pictures, and Royal Watcher Madness! Because there is little Royal going on in Late July and all of August, the Royal's staff often uses this time to take a well deserved holiday. That can mean responses to letters take a little longer than normal. Last year I got replies 4 months after I wrote. So be prepared.