Question 1: What do you think of Meghan?

Answer: I like Meghan. She is the first one of Prince Harry's girlfriends I've really liked and could see him marrying. I think she would make a good Princess. But I think they still have a ways to go in their relationship before they take that next step and get engaged.

Question 2: Could you tell me if Princess Diana could be titled as Princess Charles of Wales? And why?

That practice has mostly died out. Today, women often just take their husband's last name. But we still see a bit of it. There are a bunch of older ladies-in-waiting that use their husband's names.

For example, The Duchess of Gloucester's Lady-in-Waiting goes by Mrs. Grant Baker (see top of letter). But signs her name Lucinda Baker. 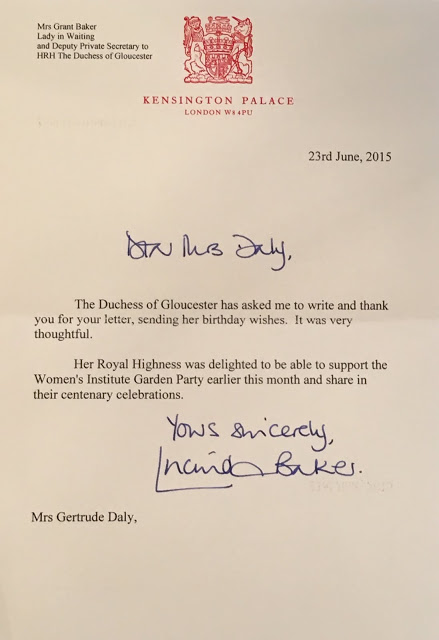 When a woman marries a man with a title, she takes on her husband's title. Lady Diana Spencer became Princess of Wales, when she married Charles. But some of the will also take on their husband's names.

Question 3: Do you think that if I ask, Prince Albert will send me back a picture in respond to my letter on the occasion of his birthday?

I don't really know the Belgium Royals policy on sending pictures if requested. I've never asked any Royal for a photo. But you will certainly get a reply from King Albert for your birthday letter.

Question 4: Does Belgian Family reply to letters on the occasion of Princess Astrid's birthday?

Answer: I've never written to Princess Astrid, but I have seen other people get replies from her. So I expect you will get something if you write for her birthday.

Question 5: On which address should we send condolences to Prince Richard family?

Answer: Which address you use depends on who are writing your letter to. For:

I wrote to Princess Benedikt in Denmark and got a reply from Germany that was from the whole family. Usually, I write to a specific person, and then in my letter say to "you and your family."

I am slightly concerned that Prince Richard passed away 3 months ago. Ideally one should send condolences with-in a week or two of the death or funeral.

But I think the family would still love to hear that people are thinking of them and send their condolences for Richard's death. But you want to make sure you comes off as genuinely sincere.

I think one of the problems with writing so late is can look very insincere like you didn't care enough or knew about this 3 months ago.

It kind of like if you sent a lovely letter to the Jordan Royals wishing them a "Merry Christmas." It can be a very lovely letter, and obviously, have good intentions, but they are Muslim and don't celebrate Christmas.

The two address are:

Question 6: Do you have an address for the Duke of Verdome?

Answer: The address for Prince Jean, Duke of Vendôme is:

Question 7: How long did you wait for a reply from Duchess of York?

Answer: Between 1-2 Months, which is the usual wait time for Royals.

Question 8: Do you think I will get a reply for the letter I sent to Prince Philip when his retirement was announced?

Answer: Yes, give it time. It's just been a month since the announcement was made. 1-2 months is a normal response time. Could be longer.

Question 9: Do Jordan royals reply?
Answer: Not normally. I've only seen a few replies from them ever, and those were from years ago.

Question 10: I'm not sure what would be the appropriate way to express my condolences about the recent horrific events in Manchester and London. I'm writing a letter to William for his birthday and I thought I would add a message of condolence at the end but I'm stuck. Who am I supposed to offer my condolences to? Writing my thoughts and prayers are with the victims and their families is okay?


Answer: As long as you are being respectful, there isn't really an inappropriate way to express your condolences.

Prince William doesn't exactly seem like the right person to write to send condolences for the attack. But I think it's fine if your writing for William's birthday to say: you were very upset by the news. The victims, their families and people of UK have been in your thoughts and prayers, etc. and if you wanted you could ask him to Please pass on your condolences.

You will see a lot of people writing to The Queen, Prime Minister, Major of London or Lord Mayor of Manchester. As the heads of the country, or that area, they are representatives of the people, so that is often who people will send condolences to. If you wanted to write to one of them:

When I am often looking for the right way to say something, I often turn to the Royals themselves. Here is the Royal Responses to Manchester & London Bridge + Borough Market Attacks.

Question 11: Do you think I'll get a reply in Dutch if I send a card in Dutch to King Willem-Alexander or Queen Maxima? Or do they just glance at the envelope and if it's from abroad, they automatically send the English thank you card? I'm a double major in English and Dutch and so far I've only written to them in English but I thought I would send my next letters in Dutch to try and get a Dutch reply.

Answer: I can't say for certain you will get a Dutch reply, but I think it is very likely. They certainly have replies made up in Dutch. They obviously don't just look at the envelope when they send out replies. They need to look at the letter to see what the person is writing about so they can send the appropriate reply. So, they will see you wrote in Dutch. But there could be some disconnect between who reads your letter and the person who sends out the pre-made reply.

I don't think English is always automatic for foreign replies. There are a lot of Dutch citizens who live abroad, who speak Dutch. But Dutch isn't all that widely spoken outside of that area, so most of their letters from abroad will likely get English replies. With other countries like Belgium, with national languages that are more widely spoken, they might be sending out a lot of replies abroad in one of those national languages.

Question 12: Do you think there will be a special thank you card for the anniversary of the Queen and Prince Philip? I know they don't usually send out photo replies but since it's their seventieth, I thought they might.

Answer: I wouldn't expect a photo. We have seen the Queen send out a special card with photos for big milestones, but not every milestone. Usually just the really big months long blowouts like her 90th birthday or Dimond Jubilee.

Question 13: What would be a polite way to ask for a photo of the Queen? I know she doesn't send back photo replies but I would love to have a photo of her that came from the Palace.

Answer: You could just ask, "Would it be possible to get a photo of Her Majesty?"

Question 14: I noticed that people writing to the Cambridges and/or Harry started getting letters from secretaries other than Miss Claudia Spens. All my letters came from her but now I saw someone who got a letter from Miguel Head. What changed? Is it because William is becoming a full time royal?


Answer: This isn't anything new. William, Kate and Harry's secretaries and other staff have always answered the occasional letters. Most of the mail is handled by the correspondence section at Clarence House. They are going to deal with all the general mail, for normal people. But when people write for something specific that needs the private secretary attention, or if it needs/deserves a more personal reply then you might see a Private Secretary write it. Royal are shown a selection of letters, and it's very likely that they private secretaries will reply to those.

Answer: Very low. I've written to the family a bunch of times (Birthdays, Christmas, illness, etc.), only got 2 replies. One for King Harald's birthday in 2016 & one for Queen Sonja's birthday 2015. I haven't always gotten a reply from the King & Queen for their birthday, so they don't have any pattern.
at Thursday, June 01, 2017